Have you recently won the lottery? If so, you’ve come to the right place because we’re here to help you spend it all!

Here are the most expensive things in the world, including the priciest car, house, NFT, watch, painting, jewel and footballer.

Non-Fungible Tokens (NFT) apply the blockchain verification system developed for cryptocurrencies, such as Bitcoin, to digital artworks. An NFT is a unique digital token, akin to a certificate of authenticity, which confirms ownership of the “real” or “original” digital artwork.

Back in 2007, when Beeple started posting art pieces online every day, he did not expect for a collage of them all to fetch such a princely sum 13 years later.

The jpg file was bought by Vignesh Sundaresan, known to the cryptocurrency community as MetaKovan.

Whilst the image is freely available online for anyone to view and download, Vignesh is the verified owner of the original. His ownership is logged in a blockchain (a digital, decentralized public ledger), meaning it can’t be stolen.

The most expensive single object on Earth is the Itaipu hydroelectric dam on the Paraná River between Brazil and Paraguay. It cost $27 billion (£20.2 billion) to build in 1984 ($72 billion; £63 billion adjusted for inflation in 2021).

The Itaipu Dam – which is actually four dams joined together – took 18 years and 40,000 workers to build.

Construction involved re-routing the course of the Paraná River, shifting over 50 million tonnes of earth and rock in the process. Four rock-crushing centres and six concrete mixing plants were built on site, in addition to two monorails, seven aerial cableways and 13 tower cranes.

12.3 million m³ of concrete was used altogether. The Itaipu Dam also contains around 380 times more steel and iron than the Eiffel Tower.

The most expensive private house in the world is Antilia, a 27-storey personal skyscraper located in Mumbai, India. It is the home of billionaire Mukesh Ambani.

The house is named after the mythical Atlantic island of Antillia, and the design uses ancient Indian Vastu shastra (“science of architecture”) principles.

The 1963 Ferrari 250 GTO is one of the rarest and most sought after cars in the world. Only 36 were ever built.

This particular model famously won the 1964 Tour de France Automobile, with Lucien Bianchi and Georges Berger behind the wheel.

David MacNeil is a Ferrari fanatic and has at least 8 other models in his collection.

The painting depicts Jesus making the sign of the cross with his right hand, while holding a crystal orb in his left, signalling his role as Salvator Mundi (Saviour of the World).

Some specialists believe it was originally painted by Leonardo for the French Royal family, although there still remains speculation over the painting’s origins, with some art historians attributing the work to one of da Vinci’s apprentices.

Neymar’s eye-watering price tag is more than double that of the previous world record – €105 million ($116.4 million; £89.1 million), paid by Manchester United to Juventus for the transfer of Paul Pogba in 2016.

Most expensive jewel sold at auction

The CTF Pink Star, formerly known as the Steinmetz Pink and the Pink Star is an internally flawless pink 59.6-carat diamond.

Mined in 1999 by De Beers in Africa, the rare diamond was 132.5 carats in its rough state and took two years to cut and polish.

Now mounted on a ring, the oval-shaped diamond is the largest internally flawless or flawless fancy vivid pink diamond that the Gemological Institute of America (GIA) has ever graded.

It was bought by Hong Kong conglomerate Chow Tai Fook Enterprises, who immediately renamed the diamond in memory of the late Dr. Cheng Yu-Tung, father of the current chairman and founder of Chow Tai Fook.

Most expensive watch sold at auction

The most expensive watch ever sold was a one-off stainless-steel edition of the Patek Philippe Grandmaster Chime Ref. 6300A, selling for 31 million Swiss francs ($33.6 million; £24.3 million).

The record-breaking bid was placed at the eighth Only Watch auction held at Christie’s in Geneva, Switzerland, on 9 November 2019. 99% of the proceeds from this auction went to funding research into muscular dystrophy.

Several features make this watch unique; such as its one-off steel casing, the golden opaline and ebony-black dials, and an inscription on one of the dials of “The Only One”.

Tue Dec 28 , 2021
JoEllenMyers stood in her living room in disbelief as she looked around at her charred belongings and as an insurance adjuster looked at holes burnt in her roof. Myers, 73, was sleeping in the bedroom of her Ankeny townhome at about 1:10 a.m. Monday, Dec. 20, when a car crashed through her sliding […] 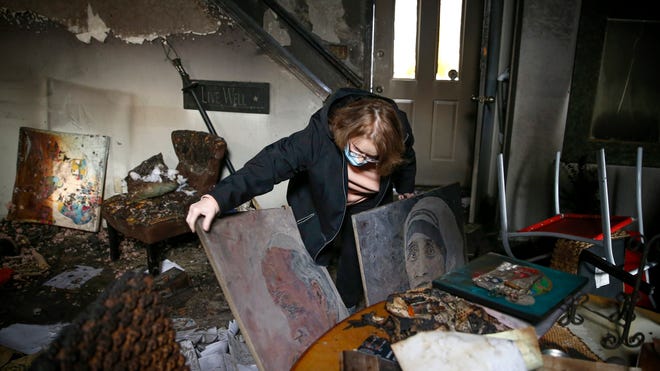