A paint job can go a long way when it comes to increasing property value.

In fact, a fresh coat of paint on a home’s interior can reap a 107% return on investment, according to a survey by HomeGain. That’s an average value increase of about $2,000.

But not all paint colors are created equal.

Take it from Paul Mutimear, a former contractor and color consultant who’s spent over 30 years figuring out which wall paints rise above the rest, and Erin Lichy, the president of Homegirl, a startup specializing in interior design, renovation, and prepping homes for resale.

As a rule of thumb, clean, warm neutrals are the way to go if you’re trying to maximize your return, Mutimear said.

“It’s basically safety,” he said. “Everyone has different tastes, but you can’t predict what those tastes are. You want something that looks fresh and clean and attractive without being blinding, so neutrals are the safest way to go.”

Beyond brand, prepping a house for sale with new paint on the walls is all about choosing the least offensive colors.

“I wouldn’t recommend going with a red or something that feels aggressive if you’re going for a resale,” Lichy said. Bold tones are a gamble, but you can’t go wrong with soft whites and grays, according to Mutimear. “No one’s going to run from the house screaming,” he said.

With that in mind, the paint pros shared the most versatile, quality shades they use and recommend most often to homeowners who want to make their spaces feel bigger and maximize their property value.

Warm whites are a classic favorite among painters, designers, and homeowners.

“I would do soft whites rather than a pure blinding white,” Mutimear said. “A lot of people think they want it as white as they can get it, but they always regret it because it’s blinding when the sun comes out.”

The key to finding the right one, Mutimear added, is selecting a white that isn’t too bright and doesn’t have yellow undertones. His go-tos are Benjamin Moore’s Atrium White, Gardenia, Oxford White, and Cloud White.

Atrium White, for example, “has actually got a touch of pink in it,” Mutimear said. “But you don’t see the pink,” he added. “It’s a way to get a warmer white without going yellow.”

Gardenia is another alternative to warming up a white without the worry of it appearing yellow, Mutimear said, as strong yellow tints are often unappealing to prospective buyers. Cloud White is another option for white-wall seekers who want extra warmth.

Oxford White has been on his list of favorites for years.

“I was recommending that for several years as the most neutral white that’s not too blinding and not too anything else,” he said. “It’s completely universal. You can put it anywhere. It’s softened, balanced, with a little bit of gray in it.”

Some of Lichy’s favorites are Strong White and Creamy White from Farrow & Ball.

Strong White appears with a very natural, neutral tone, according to Lichy. “It looks really good when light hits it,” she said, adding that she was using it in an owner’s suite bathroom with a lot of skylights.

“I tell clients to go with a gray often,” Lichy said, adding that she often uses Dimpse by Farrow & Ball. “It’s bold but still a neutral — unassuming but definitely makes some sort of a statement. It’s not in your face screaming at you, but it still gives you some contrast.”

The lightest of the three, Calm, can jibe with a variety of spaces because it’s well balanced, he said. “It’s not too blue and it’s not too creamy. It’s just right in the middle,” he said.

Shoreline is another top choice, a neutral gray just a bit darker and slightly more cool-toned than Calm.

“They’re true grays,” Mutimear said of Calm and Shoreline. “Both of those, you can’t really go wrong.”

He also likes Harbor Gray, a medium gray he said was the most neutral gray Benjamin Moore made and could work in any setting.

Homeowners looking for some extra color don’t need to stray away from gray-blues or soft greens. Light blues and mints are popular right now, Lichy said.

“There are a lot of nice blue-grays,” Mutimear said, adding that they were typically best placed in bedrooms or kitchens. Benjamin Moore’s Brittany Blue, Silvery Blue, Seedling, and Santorini Blue are some of the best, he said.

Brittany Blue is one he recommends often: a muted, cool gray that leans blue. “It’s mild, soft, and restful,” he said. “It’s not bright.”

Similarly, Silvery Blue is another favorite, a slightly darker and slightly cooler version of Brittany Blue. Santorini Blue is also a light-blue-gray favorite. “These are sort of sexy bedroom colors,” he said.

Kitchens, especially in a city, should almost always be warm and neutral, Lichy said.

But Mutimear avoids white in the kitchen because it shows too much dirt. A subtle green, like the subdued olive-shade Seedling, is a great alternative, he said. The shade is a subtle but distinctly green hue.

“Green is sort of, by definition, between warm and cool,” he said. “It’s a muted freshness.”

Fri Oct 15 , 2021
Transcript Richardson: I’m Chris Richardson. Welcome to my talk on minimizing design-time coupling in a microservice architecture. In this talk, I’m going to answer three questions. What is design-time coupling? What problems does it create? How do we design loosely coupled services? I’ve done a few things over the years. […] 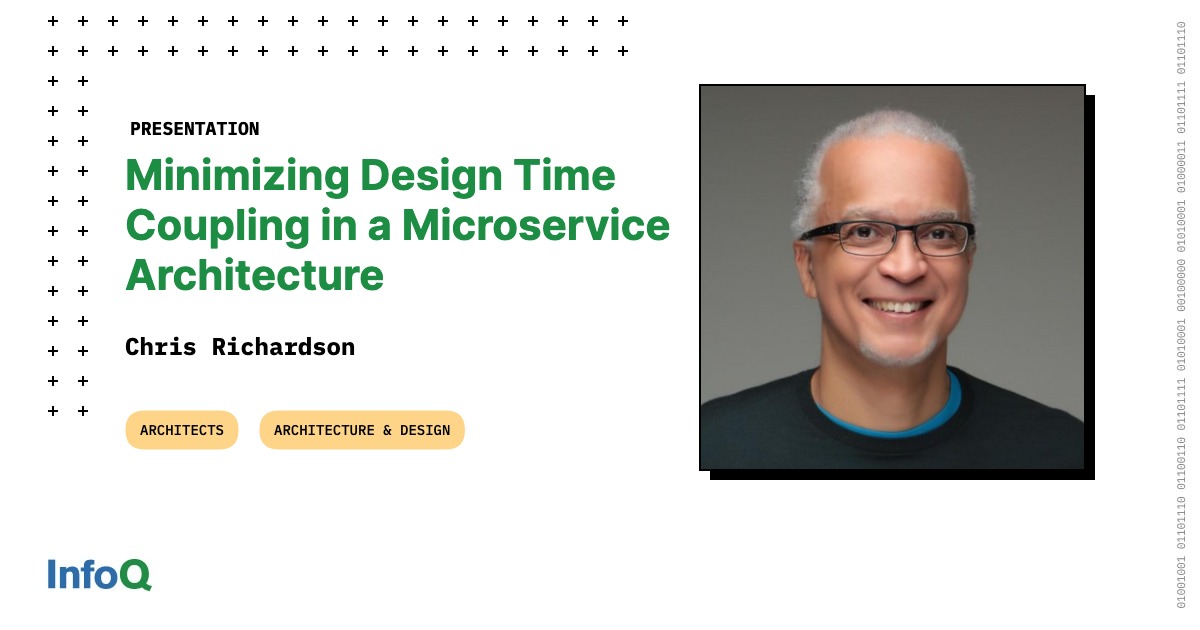