A watercolor painting of the John B. Palmer House, “Graniteville,” a once-elaborate granite mansion that stood at 218 Rope Ferry Road in Waterford in that historic section of town, was recently donated by the artist Carla Caudle to the Waterford Historical Society, Inc. The society is offering fine professional prints of the painting for $100 each, unframed, with proceeds from the sale to support the society’s programs, building upkeep and restorations.

Sketches, photographs or renderings of the Graniteville mansion are scarce, which makes the painting all the more valuable and appealing. Painted in the 1960s, its somber, autumnal tones depict the mansion as weary and worn, with a barren, arching tree overhead, even mysterious; yet for some, it stirs up memories of its elegant past.

The society acquired the donated painting as a result of an extensive discussion on the Facebook group “What’s Happening in Waterford, Connecticut” begun in June 2020 by the artist, former Waterford resident Caudle, who sought to give it away. Dozens of comments from former and present local residents excitedly recalled the mansion in its grandeur, and its decline, describing it as “spooky,” “haunted,” and “with spirits that roamed its halls.”

“Graniteville” both a mansion and a historic district

The elaborate mansion was constructed in 1876 by John B. Palmer, a quarry owner who named it “Graniteville” like the district, as evidenced from a granite pillar that still stands on the property. Granite quarrying was an important part of Waterford history for more than 200 years up to the early 1900s, accounting for a major part of the town’s non-farm employment. Granite was shipped from local quarries to become part of monuments, public libraries and even the bases of the Statue of Liberty and Grand Central Terminal.

Described in D. Hamilton Hurd’s 1882 work, “History of New London County with Biographical Sketches of many of its pioneers and prominent men,” Palmer, who was born in Norwich, took over operation of the Millstone quarry and became wealthy. He was “a man of constructive ability and tremendous energy. He developed the business in which he was engaged to a greater degree than those who had preceded him and gave employment to many more hands.” The book includes drawings of both Palmer and the house in its original state.

Graniteville is on the National Register of Historic Places

The local granite industry attracted immigrants from England, Ireland, Scandinavia, Scotland and Italy who were the quarry owners, blacksmiths and stone-cutters who settled in the area known as Graniteville. Wikipedia describes it as “a mainly residential historic district in Waterford, Connecticut. It is ranged along Rope Ferry Road, near granite quarries that were once a major industry in the town. Most of the 31 historical buildings in the district are plain residences occupied by those quarry workers; also included are the circa 1878 Graniteville School at 239 Rope Ferry Road, and the house of John Palmer, one of the proprietors of the quarries, at 218 Rope Ferry Road. His house, a circa 1860 Italianate updating of an older house, is the most elaborate house in the district. The district was listed on the National Register of Historic Places in 2003.”

“The Granite History of Waterford,” written by Waterford resident Willard A. Reed III as a master’s thesis, is an in-depth source about the local quarry industry, and is available to patrons in the Waterford Public Library’s historical reference section. Reed mentions Palmer, who “took over the lease of the Connecticut Granite Quarry in the southern section of Millstone and renamed it John B. Palmer & Company.” He too includes the drawings of the house and John B. Palmer, taken from Hurd’s history.

Carla Caudle initiated the Facebook discussion in June 2020: “Would anyone from Waterford like this watercolor painting? It’s of an old house in the Graniteville area, on Rope Ferry Rd. between St Paul’s Church and Gardiners Wood Rd. The house was abandoned when I was a kid and we used to walk past it a lot. We thought it was haunted and there were old gravestones in the yard, so we always crossed to the other side of the road because it looked so scary. I painted this in the late sixties. If anyone remembers it and would like this painting, I would love to pass it on. Free.”

Dozens of responses to the post streamed in in the ensuing weeks. One comment says “That house was always a mystery.” Another contributor relates “My uncle thurston howard owned it at one time . . . I remember being lower n [sic] to the well to see if the pipe was clogged . . . scary! … there were secret room [sic] in it.” Yet another says “Omgosh, loved that house,,,was sad when they tore it down.”

Seeing the excited and positive responses, suggestions as to the painting’s final destination, and requests for prints, Caudle offered to have prints made. But Waterford Historical Society member and blacksmith supervisor Charles Sedell, who remembers and always admired the house, saw the post and suggested that the painting be donated to the society. Shortly thereafter, before she retired to Florida, Caudle donated the painting in person to the society at the Stacy Barn on Jordan Green before its Sept. 2020 members’ meeting.

Professional prints of the “Graniteville” mansion being offered

After its acquisition, spurred by the demonstrated interest in the painting of the historic mansion, the society decided to have a limited supply of professional prints made to raise funds for its ongoing restoration projects and other programs. Sedell donated the necessary funds. Old Lyme artist Len Swec (whose paintings were included in the Society’s Art In Waterford: Past+Present+Future juried exhibitions in 2020 and 2021) offered expert advice as to where to have the prints made professionally and saw to their production.

Prints are available for $100 each, unframed, and are available upon request by contacting the Waterford Historical Society, Inc. through the website https://www.waterfordcthistoricalsociety.org/contact2.html, by emailing [email protected], or calling 860-389-7529. Requests may also be mailed to P.O. Box 117, Waterford, CT, 06385.

Will the mansion remain just a memory?

The Palmer lay in ruins for many years, but was sold in October 2020 to an individual who hopes to restore the mansion to its former grandeur, according to a conversation with the new owner by a resident who lives across Rope Ferry Road in one of those original 31 structures of historic Graniteville.

Holly Anderson Camerota is the publicity chair and first Vice President of the Waterford Historical Society.

House of the Week: Once the home to the Onondaga Ski Club, this Tully property is now a ‘special place’ to live

Mon Oct 11 , 2021
TULLY, N.Y. – In 1972, Richard, and Rachel Perkins were living in Eastwood and wanted to move their family into the country. Their son Dave said they were hoping to find a quiet spot “nestled in nature,” someplace where their four children could go out exploring, raise animals, and grow […] 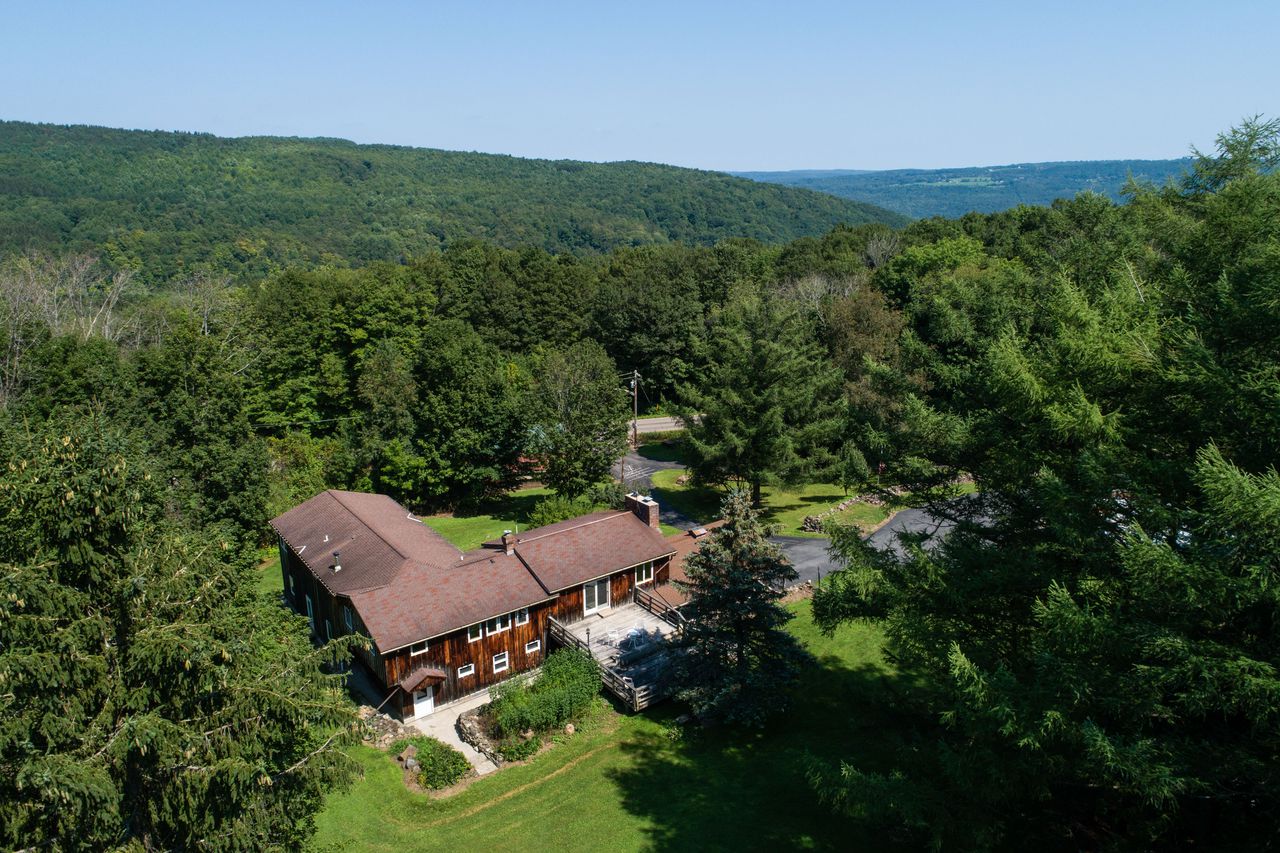