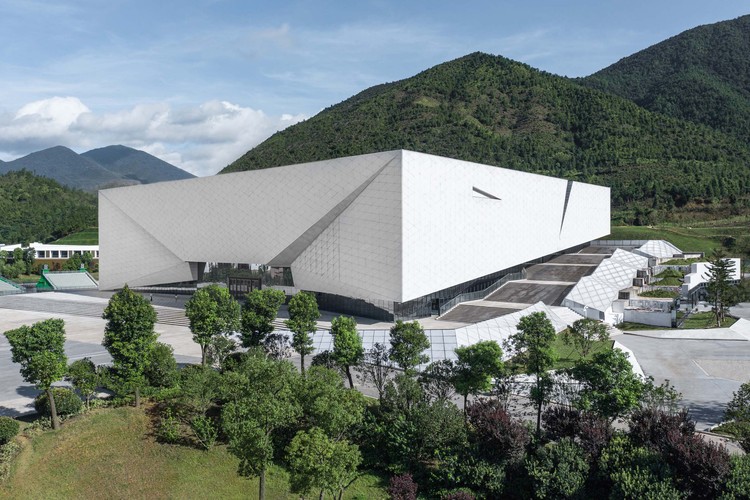 Text description provided by the architects. Before get to the memorial hall, there is a mountain road composed of winding paths and steps. The entrance plaza is divided by an oblique path and the sharp patterns, giving the plaza a heavy commemorative atmosphere. After stepping on ten steps, the surrounding granite exterior walls gradually form a strong mass turning. The deep concave entrance and undulating stone changes affect the mood of visitors constantly. Therefore, tourists will enter the hall from here with their hesitation and expectation.

The architects cleverly used natural light while processing space. The well-designed windows seem like a signal of the tour route. The light of the entire memorial hall is woven in various forms of dots, lines, and surfaces, composing connection at each node of the path.

As the starting point of the lobby, the criss-crossing lattice frame of skylights cuts the light to various changes falling into the main wall. And the mottled light and shadow is projected on the end of the winding ramp, turning into a wonderful visual focus.

During the zigzag memorial path, a ray of light emerges in the dark space, which is created by the side walls and the wedge-shaped windows on the roof, giving visitors the light of hope in confusion. In the last exhibition hall, the entire glass curtain wall brings the mountain scenery and brightens light in interior, and at the same time, the heavy mood of the visitors is suddenly released.

Stone and glass, as the two main materials of the memorial hall, implies suffering and misery in the war. The heavy stone, like successive difficulties, implies barriers and hardships, while the sharp wedge-shaped glass surface, cutting through the volume on the façade, symbolizes that various approaches, explored from difficulties, will eventually lead to freedom and light.

Through the change of material and volume, the strong antagonistic emotion and memorial meaning is embedded in the building, expressing a unique war memorial.