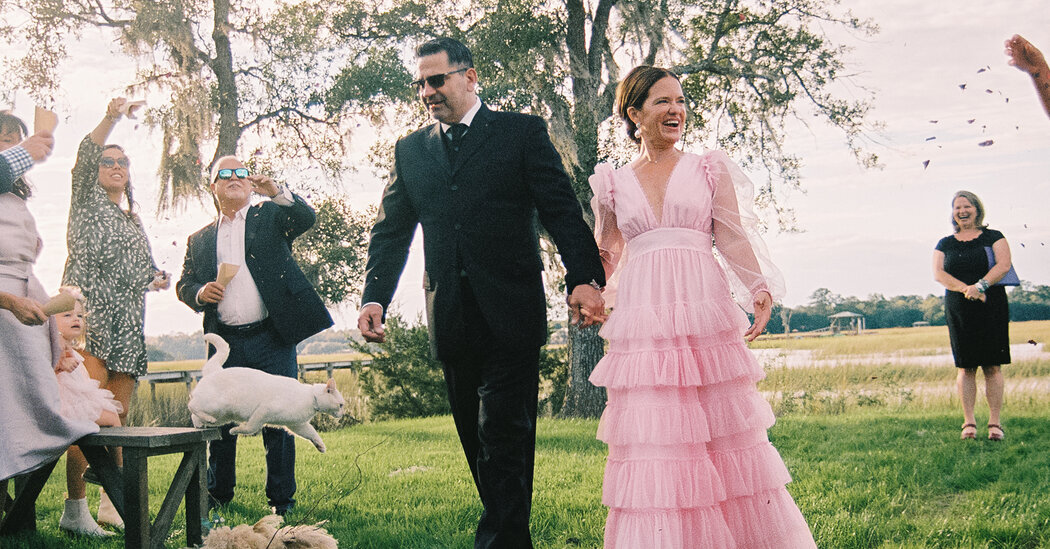 Rebekah Headen fell in love with Tony Hernandez years before she actually met him. Not only that, it was love at first sight.

“Where did you get that beautiful painting?” Ms. Headen, 57, who is known as Becky, recalled asking a neighbor who had moved from Atlanta to Charlotte, N.C., where she lives, in 2001.

“It’s a Tony Hernandez,” the neighbor said of the painting of a WWI airplane with a fish hook hanging out of one of the wings. “He’s an extremely talented artist who lives in Atlanta.”

Ms. Headen’s interest in Mr. Hernandez, 56, as an artist increased significantly when he enjoyed a brush with fame following the release of “Drops of Jupiter,” the second album produced by the rock band Train, which featured his artwork.

“That was huge for him,” said Ms. Headen, who received a bachelor’s degree in studio art from the University of North Carolina, Chapel Hill, and works as a talent strategy manager for the Hendrick Automotive Group in Charlotte.

“I fell in love with his style,” added Ms. Headen, who at the time was married and raising two young boys. “I was like OK, I’m going to get one of those paintings one day.”

In 2002, she did just that, commissioning a painting by Mr. Hernandez through Hidell Brooks, an art gallery in Charlotte, as a Father’s Day gift for her then husband. (Titled “Inhook,” it was completed in 2003.)

Ms. Headen followed her order with her very first call to Mr. Hernandez, with whom she confirmed shipping details before learning that he is a history buff who has drawn inspiration from the lives of children who grew up during the Holocaust, as well as those who struggled through the Great Depression, especially in the ghettos of the Bronx where his grandparents lived.

An Atlanta native, Mr. Hernandez attended Georgia Tech before leaving college to pursue a career in painting. His works, mostly of children during the Holocaust and Great Depression, are currently on display at numerous art galleries, including the Fine Arts Museums of San Francisco and the Bronx Museum of the Arts.

The two connected again in 2004, this time in person, at a gallery opening in Charlotte.

“He was such a nice guy,” Ms. Headen said, “though he did seem to mumble a lot.”

After that, they would not see each other until 2013.

Early that year, Ms. Headen, who by then was divorced, went to Chicago with several friends, one of whom mentioned that she had a friend who was single and talented and that his name was Tony Hernandez.

“I thought to myself, ‘This could be very interesting,’” Ms. Headen said.

Mr. Hernandez, also divorced, reached out to Ms. Headen at the suggestion of their mutual friend in June 2013. They eventually began a conversation that led to a first date to watch the Sept. 1 episode of Breaking Bad, their favorite television show.

Mr. Hernandez rode his Harley motorcycle in the rain from Atlanta to Charlotte to meet Ms. Headen for the date.

“I had no negative thoughts as to why I shouldn’t go, which is rare for me,” Mr. Hernandez said. “So I thought maybe it was meant to be.”

In February 2018, after years of dating long-distance, Mr. Hernandez moved to Charlotte to live with Ms. Headen. (Her two sons were living on their own by then.) The pair became engaged roughly three years later, on Feb. 14, 2021.

“I found Becky to be the sum of so many beautiful things,” Mr. Hernandez said. “She was beautiful, smart and understanding, especially about the fact that I spend more time with my painting than I do with her.”

The couple was married Oct. 29 at the home of their friends Kim and Ed Seeger on Little Stono Island, in Charleston, S.C. Lauren Stines, a Unitarian Universalist minister, officiated before 10 fully vaccinated guests, who included Ms. Headen’s sons Franklin, 27, and James, 24.

On Location: The Colombian Towns, Architecture, and Music that Inspired Disney's 'Encanto'

Tue Nov 30 , 2021
For film directors and production designers, research trips offer a flood of information about a destination and culture. And for Disney’s Encanto directors Byron Howard and Jared Bush, their two-week trip to Colombia was no different. With Lin-Manuel Miranda, who wrote the Disney flick’s original songs, they traveled from Cartagena […]