Merrill looked around in awe at the breathtaking ocean views that covered the walls, she recalled. There were boats sailing across the water, and plush, colorful trees and lighthouses on the shore. A town could be seen in the distance and tufts of clouds floated in vast skies.

“Everything was in perfect perspective,” she said. “Like you just walked into that village and there you were. The shadowing, everything was really pretty perfect. And to be done on such a large size … it’s really something.”

Merrill went home and got her phone.

“The murals were spectacular,” she said. “I had to take a picture.”

Merrill shared photographs of Pesce’s murals on a local Facebook page. As first reported in the Bangor Daily News, residents of Stockton Springs — a coastal community with a population of 1,600 residents, not far from Belfast — were impressed by the artwork on the walls of the yellow ranch house sitting on US Route 1.

Merrill said the murals were painted on sheet rock, and their fate will fall into the hands of the next owners of the property once it is sold.

“It’s too bad she didn’t do it on a removable canvas,” she said.

Peter Walls, an artist who lives in Stockton Springs, is among the many new admirers of Pesce’s once-hidden work.

“Being a muralist myself, its always fun to see other people’s work,” he said. “It’s always amazing when an artist is doing things themselves and not worrying about them being seen. To have someone in your small town doing something no one knew about, like this… I think everyone is blown away. She was very talented.”

Walls noted that Pesce’s home overlooked the mouth of the Penobscot River, and the scenic water views surely provided her with plenty of inspiration.

Matthew Pesce, 42, said his mother, who once lived in Massachusetts, bought the house in 2003 because she wanted to be close to the water.

She lived there with his 44-year-old brother Robert, who is mildly autistic, he said. Robert worked in food services at Waldo County General Hospital and has since moved back to Massachusetts to live with their father.

“My mother was kind of like his caretaker, or assistant,” said Matthew, who lives in California. “Both her and my brother liked it up there.”

But as time went on her health began to worsen and she died Aug. 23, he said.

“She was pretty private, and as her health declined, people saw her less and less,” he said.

Pesce said when his family lived in Woburn, Mass., his mother had a ceramics studio and taught classes there. And she always enjoyed painting.

“It was something she liked to do,” he said.

Matthew said several years ago his mother asked him if there was anything he’d like her to paint, and he suggested Motif Number 1, a familiar, iconic image of a little red fishing shack in Rockport.

“She said, ‘well you know that Motif Number 1, everyone’s done that, it’s been done so many times,’” he said.

Pesce said he asked her about painting it a couple more times, and then “kind of dropped it,” figuring that she didn’t want to or just didn’t have the time or energy to do it.

But when he saw the article about his mother’s murals in the Bangor Daily News and the photos of them, one picture of a painting on a canvas stood out to him — it was Motif Number 1.

After posting about it in the local Facebook group, “I was fortunate enough to track it down,” he said. “Someone’s going to mail it to me.”

Tue Oct 12 , 2021
Installation Made of Mushrooms Wins 2022 Tallinn Architecture Biennale Competition Courtesy of Simulaa Share Share Facebook Twitter Pinterest Whatsapp Mail Or https://www.archdaily.com/969957/installation-made-of-mushrooms-wins-2022-tallinn-architecture-biennale-competition Australian duo Simulaa and Natalie Alima have won the competition for the 2022 Tallinn Architecture Biennale in Estonia with an installation made of mushrooms. Titled Burlasite, the structure’s […] 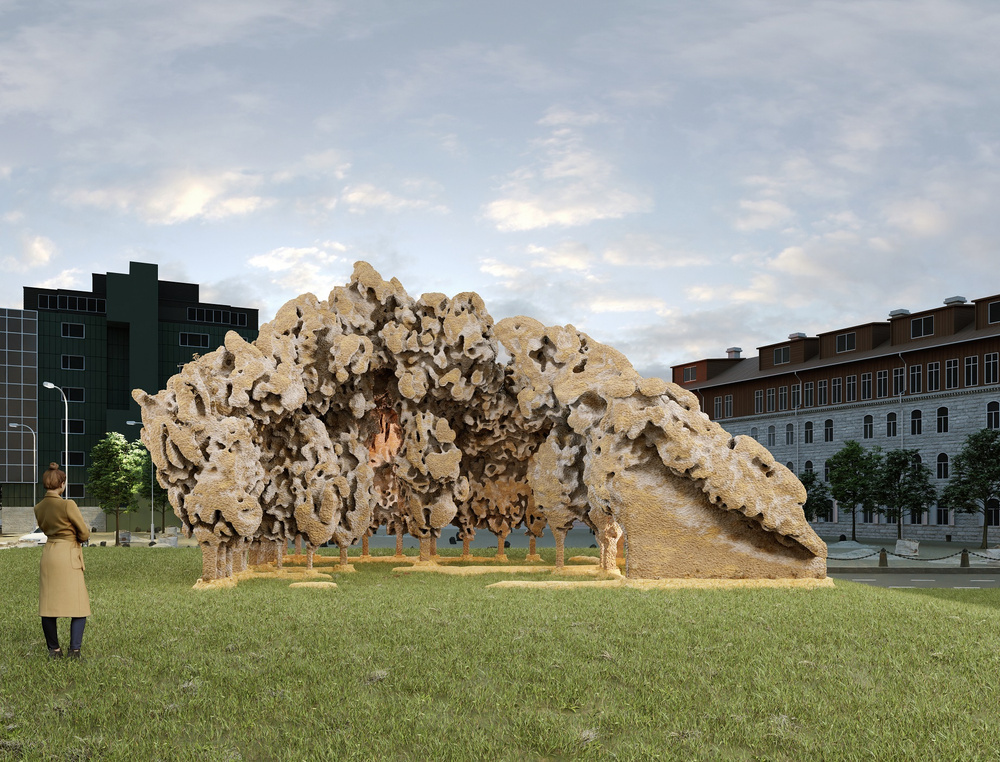