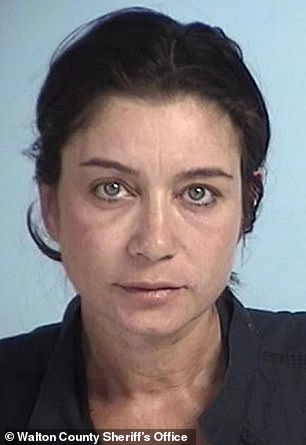 A high-flying realtor who worked for Coldwell Banker and Berkshire Hathaway in California has been revealed as the ‘Delta Karen’ who was arrested by the FBI for attacking an 80-year-old passenger on a plane after he removed his face mask to eat – while she was herself maskless.

Patricia Cornwall, a real estate agent previously based in Los Angeles, who in the 1990s was a member of the Raiderettes cheerleaders for the then-LA-based NFL team, was identified as the unruly passenger on the Thursday flight from Tampa to Atlanta when the altercation took place.

Cornwall, who was a former small-time actress going by the name of Patty Breton and had a minor role in Baywatch, has recently moved to Florida, Heavy.com reported.

She also appeared on an episode of Married… with Children in 1989 and featured in Playboy: Cheerleaders, before becoming a Raiderette in the 1990s.

She posted on a website looking for a room to rent for $1,200 a month in Okaloosa County, in the Florida panhandle.

‘Moving from California. I am single divorced and have two grown children who are overseas in UK. I have been practicing residential real estate for 13 years in Los Angeles/Westside. 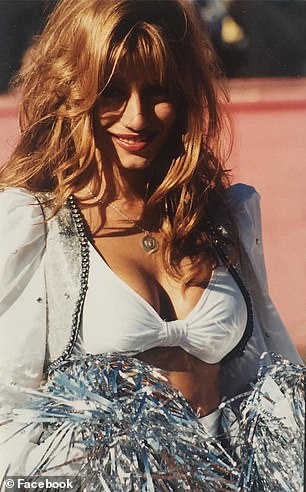 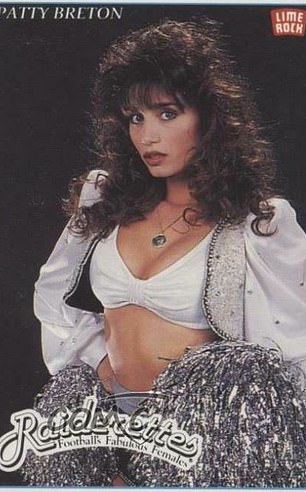 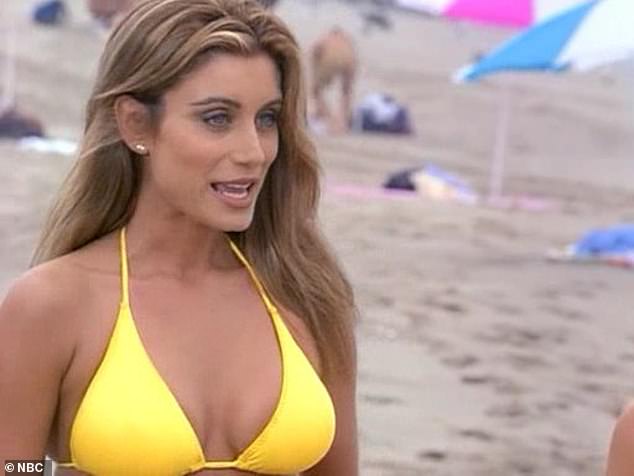 ‘I have also lived in Florida in the past few years and I’m excited to reintroduce Florida back into my life permanently. Renting a room will be a great start settling me in. Furnished is preferred.’

On her LinkedIn, she describes herself as: ‘Luxury Property Specialist at Berkshire Hathaway HomeServices California Properties’.

Cornwall, 51, was not wearing a face mask on Thursday’s flight.

But she took exception to an 80-year-old man taking off the face covering to eat and drink while at his seat.

The pair exchanged a volley of foul-mouthed insults, which ultimately descended into physical violence, with at least one crew member and multiple other passengers reportedly injured while trying to get Cornwall away from the man, who has not been identified.

The attack came as the Federal Aviation Authority (FAA) details a record number of air rage attacks – with 5,300 reported in 2021, compared to only several hundred in previous years, according to Morning Consult. Many of the 5,300 were related to face masks. 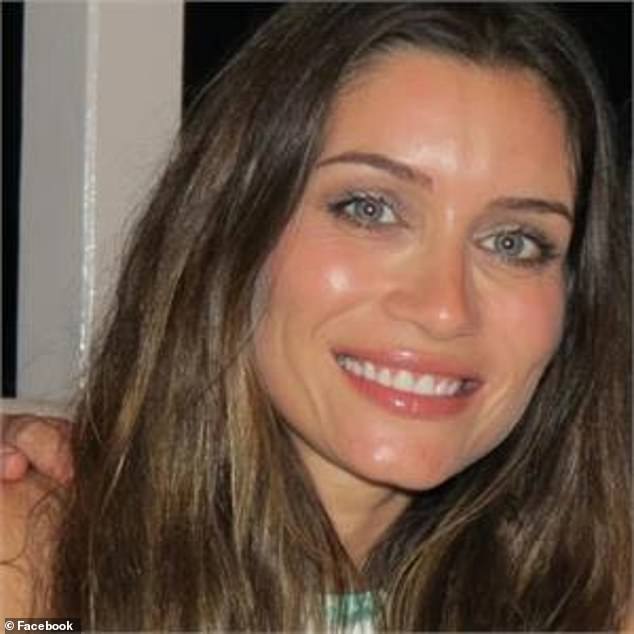 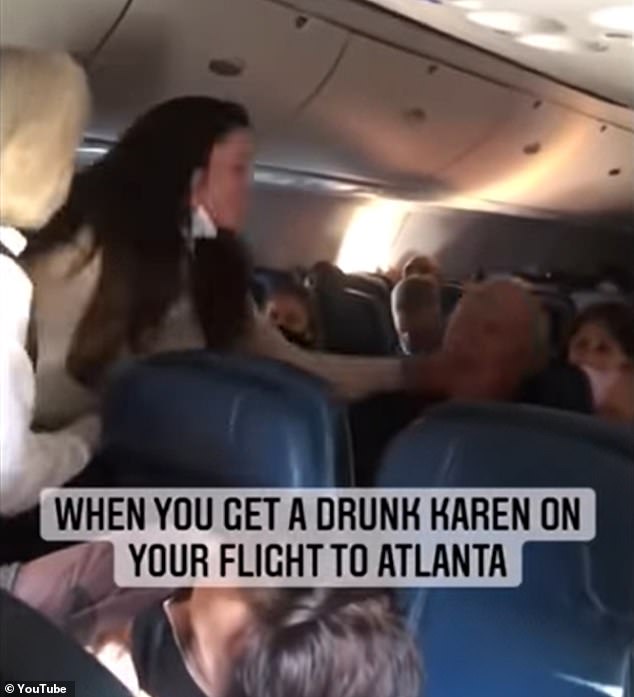 Cornwall was captured hitting and scratching the passenger during the altercation 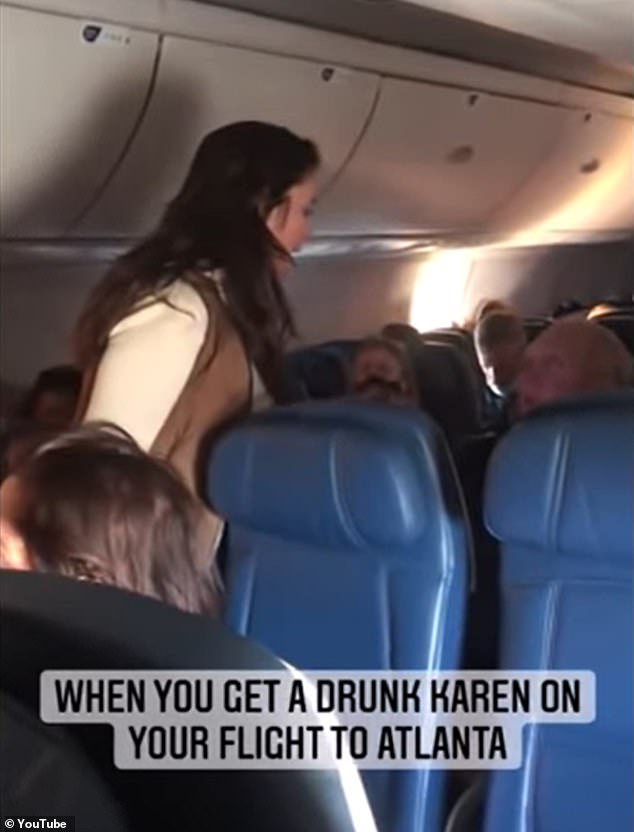 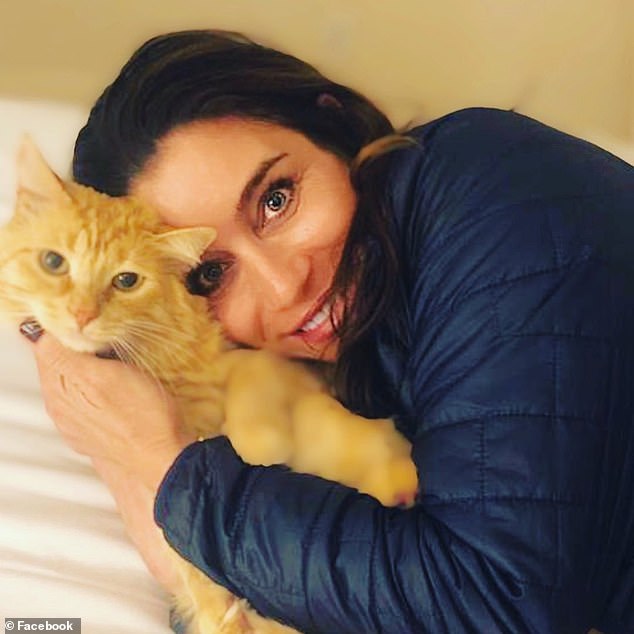 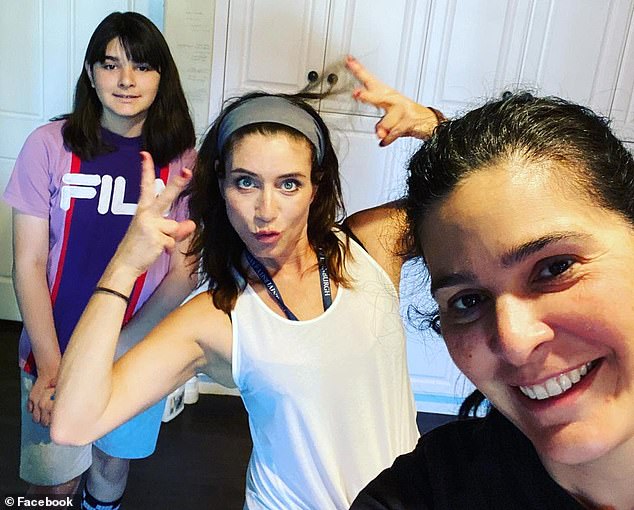 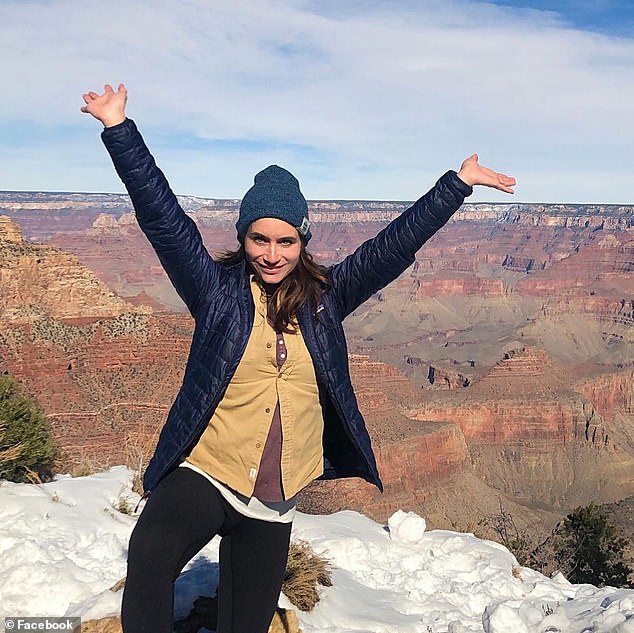 Cornwall, 51, is seen at the Grand Canyon in an image posted to her social media 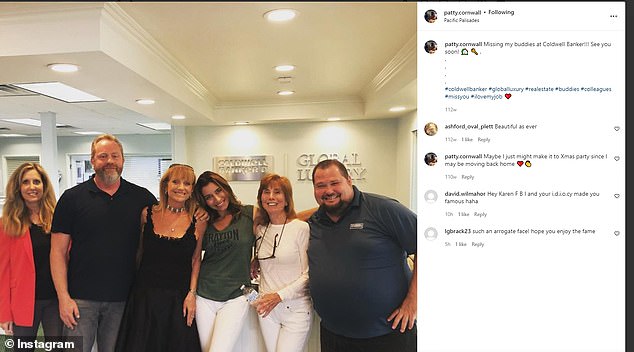 Cornwall captioned the photo from November 2018: ‘Missing my buddies at Coldwell Banker’ 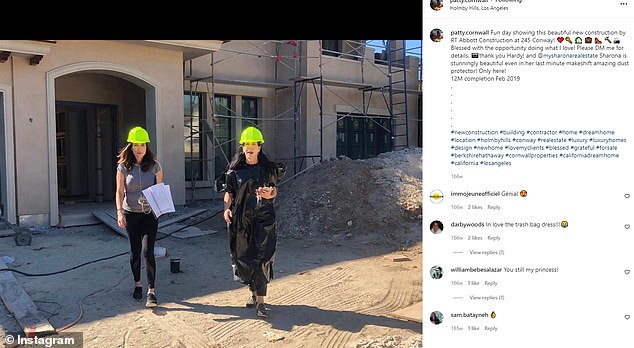 Cornwall, left, is seen in a photo she posted to Instagram of her at work several years ago

Cornwall was seen hitting, scratching and spitting at the older male passenger as the pair exchanged expletives after she approached him for not wearing his mask.

Following the brief violent interaction, she was then escorted to the back of the plane by flight attendants and was arrested at the Hartsfield-Jackson Atlanta International Airport by Atlanta police.

It remains unclear how the other passengers and flight crew members were injured, and how severe those wounds were.

Cornwall is due to appear for an initial appearance at the Federal Courthouse in Atlanta on Monday, a source from the FBI told DailyMail.com. 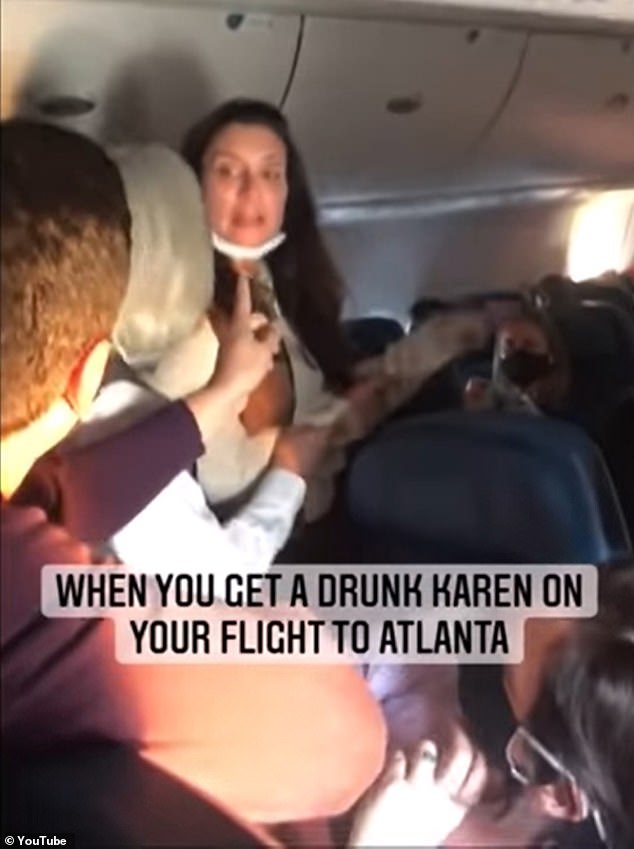 In the video captured by ATL Uncensored, Cornwall is seen angrily confronting the man for not wearing his mask even though he had taken it off to eat.

‘Put your f***ing mask on,’ Cornwall tells the man as the pair continue to go back and forth with another.

After continuously refusing to comply with her demands, Cornwall then aggressively tells him ‘stand your a** up!’

‘Sit down Karen!’ he yells, as flight crew members approach the fighting pair in an attempt to get them to calm down.

She then demands the crew to help her as she repeatedly barks: ‘Tell him to mask up’

A male flight crew member also demands Cornwall put her mask on as she continues to request that they ask him to wear his.

She is then seen smacking and scratching him in the face. 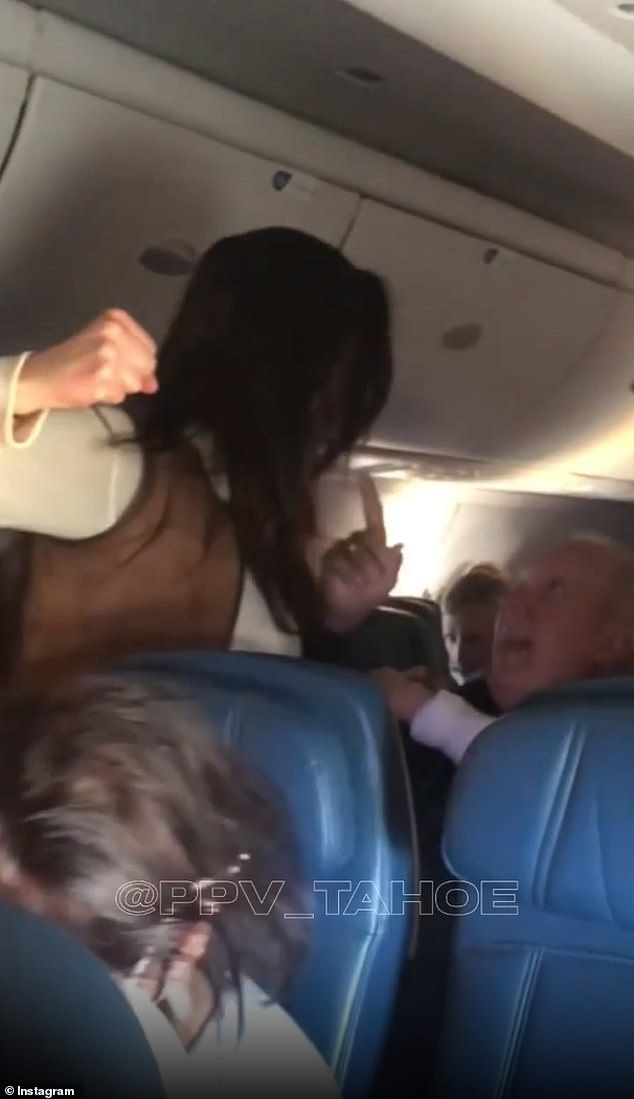 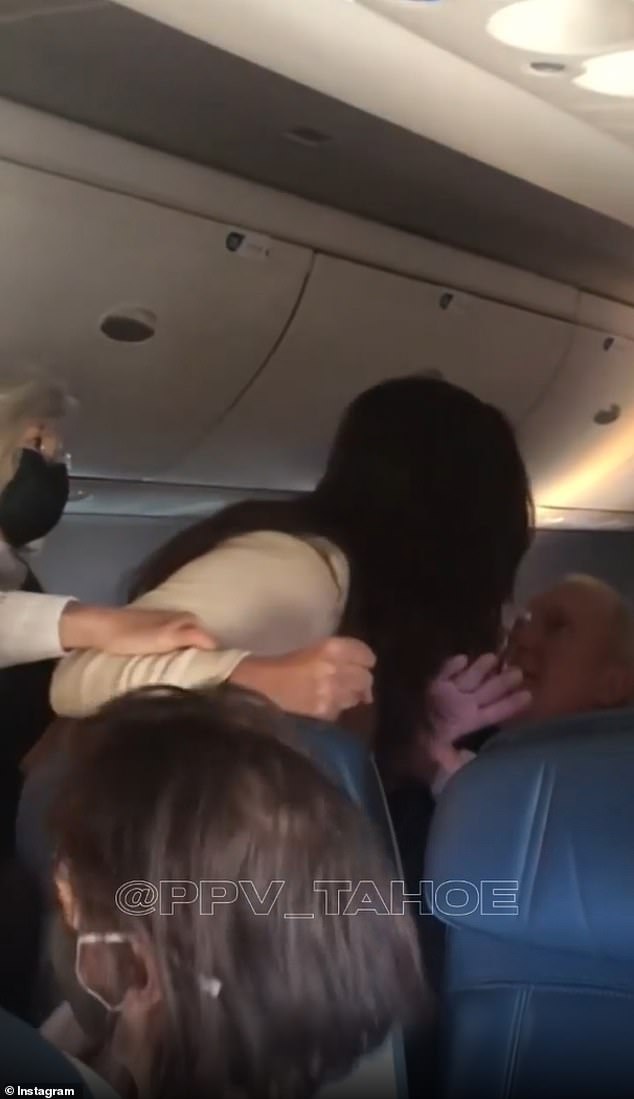 The pair continue to shout expletives at each other as a female flight attendant starts to pull Cornwall away.

She then spits on the man as the attendant and other flight crew members attempt to bring her to the back of the plane.

She continues to ask the flight crew members to get the man to put his mask on as hers still remains under her chin.

‘I will put my mask up when you put your mask up!’ she shouts angrily before being escorted by flight crew as well as other passengers.

Cornwall was then taken into custody upon arrival at the airport by the police.

The video has received over seven million views since it was posted to Twitter on Friday. 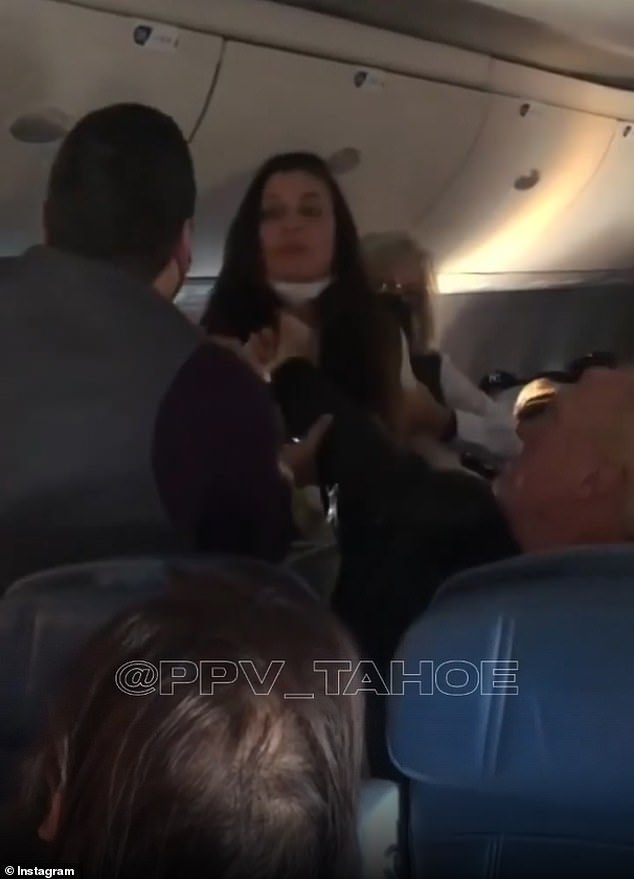 Despite her demands, she was also reminded to pull her own mask up as it remained below her chin during most of the fight

The police record states: ‘On December 23, 2021, after Flight 2790 landed, Atlanta Police Department (APD) officers boarded Flight 2790 at the arrival gate, at the request of Delta Airlines.

‘Representatives for Delta Airlines and RSM informed APD officers that he was assaulted during the flight by another passenger, CORNWALL.

‘CORNWALL was detained after the plane landed. RSM was interviewed by phone by your person in charge and RSM said the following: A passenger recorded a mobile phone video of some interaction between CORNWALL and RSM which I viewed the video and it corroborated the information RSM provided.

‘Additionally, the video shows CORNWALL hitting RSM in the face.

On Delta’s flights, as on all flights, mask must be worn at all times during the flight except when eating, drinking, or taking oral medication.

The mask must not remain below the nose and mouth for an extended period of time as it must be put on properly in between bites and sips.

The only other acceptable reason for taking it off is to put on an oxygen mask in the event of an emergency or for medical exemption purposes.

This flight-related incident comes after Dr Anthony Fauci told US travelers on Sunday that removing masks on an airplane is ‘not something we should even be considering’ due to the recent surge in cases and the presence of the new Omicron variant.

‘We want to make sure people keep their masks on. I think the idea of taking masks off, in my mind, is really not something we should even be considering,’ Fauci told ABC.

Fauci also mentioned the possibility of a vaccine mandate for air travel as a further safety precaution.

‘So I mean, anything that could get people more vaccinated would be welcome. But with regard to the spread of virus in the country, I mean, I think if you look at wearing a mask and the filtration on planes, things are reasonably safe.’

The Omicron variant has recently seen thousands of flights delayed or cancelled over the holiday weekend, which has left passengers stranded in airports around the country. 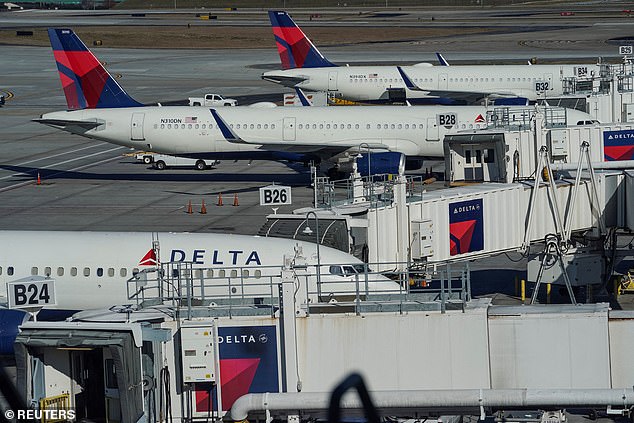 Delta’s mask policy only allows masks to be below the chin for eating, drinking and taking oral medication but must be put on properly between bites and sips

A survey undertaken last month found 85 percent of flight attendants had been confronted by unruly passengers during the pandemic, the New York Post reported.

It also found that nearly one in five had been attacked.

The FAA has received more than 5,000 complaints about unruly passengers so far this year, and has investigated more than 1,000 incidents – five times more than in 2020.

Unruly airline passengers in at least 37 incidents could be charged with assault for attacking crew members or other fliers after the FAA announced referrals the federal agency made to the FBI for possible prosecution.

An FAA spokesman said in November that the agency has initiated 227 enforcement cases and referred 37 to the FBI for review. The agency did not identify any individuals.

Through November 1, there had been 5,033 reports of unruly passenger incidents, including 3,642 related to pandemic face covering regulations.

‘Let this serve both as a warning and a deterrent: If you disrupt a flight, you risk not just fines from the FAA but federal criminal prosecution as well,’ FAA Administrator Steve Dickson said at the time.

Concrete: How a Centuries-old Construction Material Get a New Recipe

Fri Dec 31 , 2021
Concrete has been a material that’s been used for centuries as the foundation for just about everything from roads, bridges, buildings, irrigation ditches, seawalls and more. But, with the COVID-1 pandemic (and climate change) making things worse not just for the construction industry, but for everyone else, concrete suppliers […] 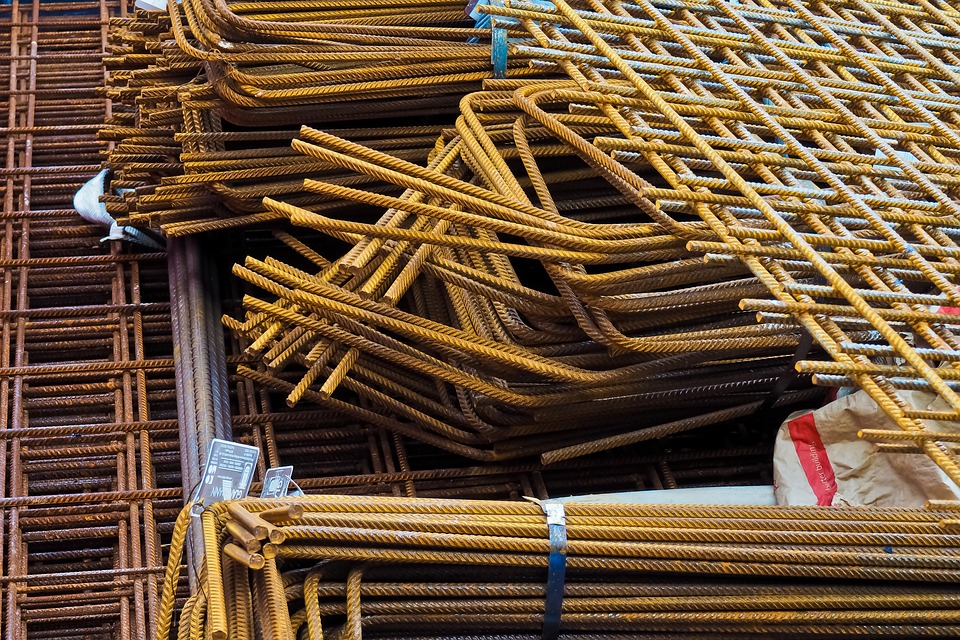