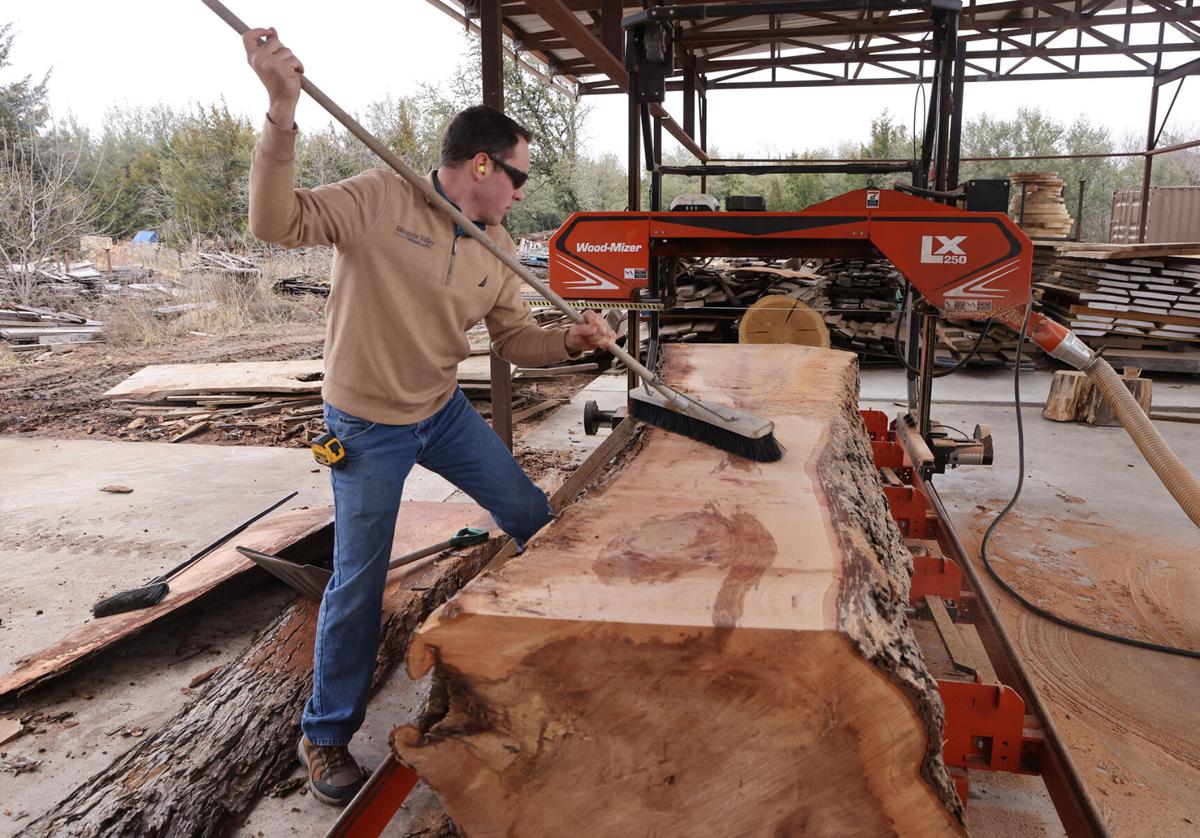 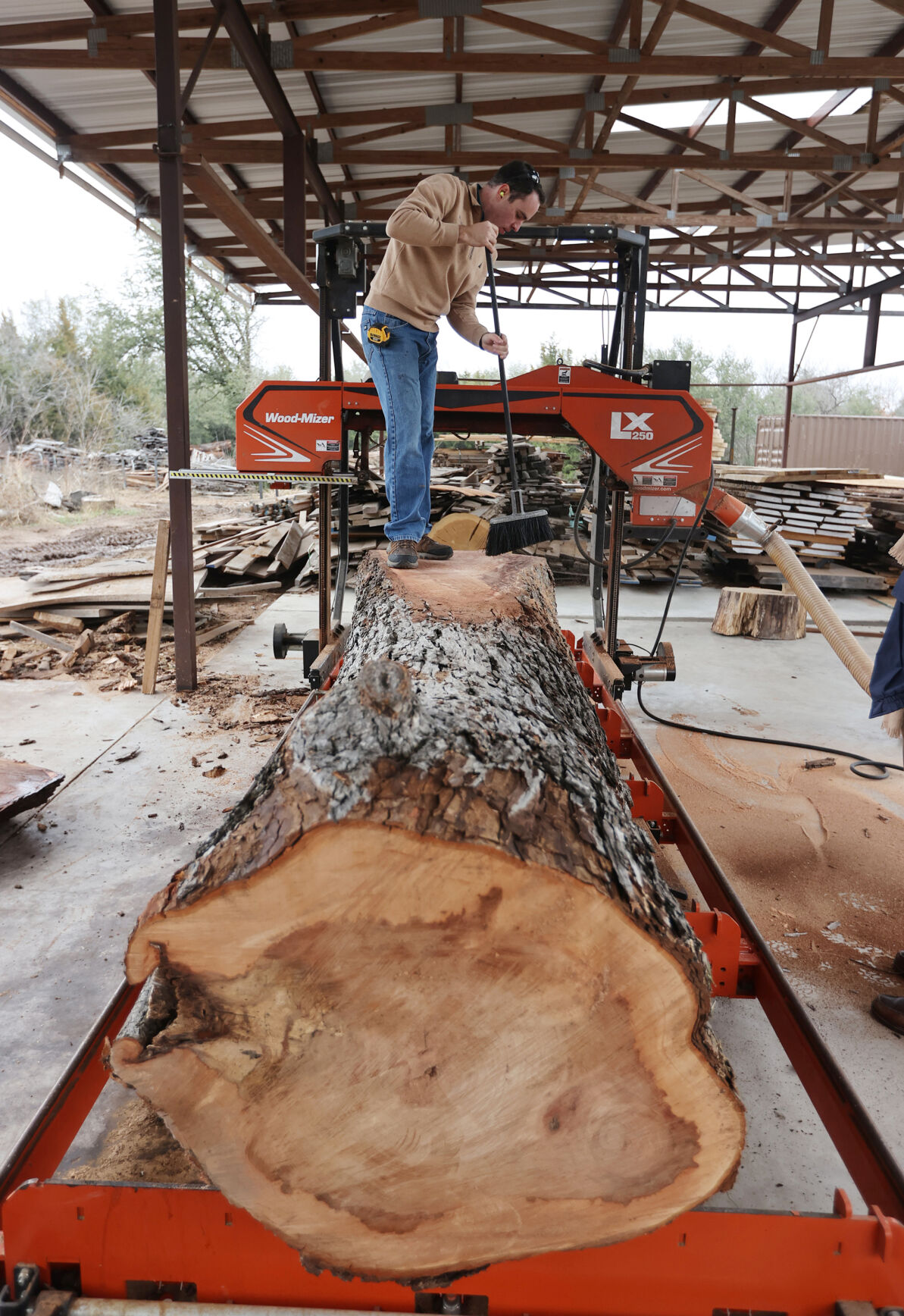 Mesquite Valley Woodcrafts owner Caleb Scarbrough sweeps sawdust after cutting a fresh slab from a pecan log. Dead or damaged trees removed from Oakwood Cemetery in Waco are among the timber that makes it to Scarbrough’s mill.

After decades, if not a century, watching over the graves at Oakwood Cemetery, some stately trees are finding an afterlife not chipped in a landfill, but in a home, thanks to the work of an area sawmill and woodshop, a tree service and a cemetery administration.

Since December, the growl and whine of chainsaws and heavy equipment has accelerated, punctuating the quiet repose of the Waco cemetery where more than 38,000 people are buried, part of a comprehensive plan to care for the cemetery forest and, in doing so, protect visitors and guard its stone markers and monuments.

For the cemetery’s general manager Clint Lynch, it is a question of stewardship. For Dallas tree service Southern Botanical, it is a challenging project requiring a measure of special expertise. For Mesquite Valley Woodcrafts, near Chalk Bluff, it is a new source of valuable hardwoods. And for scores of trees, it is a second life indoors in kitchens, offices, restaurants and homes.

As many Waco property owners know, last February’s brutal cold killed scores of trees and snapped branches off of thousands more. At Oakwood Cemetery, which counts 2,440 trees over its 165 acres, the severe weather largely accelerated the soon-approaching end for many trees.

“The cemetery started in 1878,” Lynch said. “A lot of the trees have done their time. It pains me to have to remove a tree, but we have to make sure they’re in good shape and not dangerous.”

Faced with balancing a future where more people are getting cremated rather than buried and a past of notable Waco history, the cemetery’s board of directors is in the middle of a consulting study to help shape a long-range plan.

The cemetery’s preservation led trustees to hire the services of Dallas-based Southern Botanical to remove dead and damaged trees, then prune and maintain the remaining trees for the next five years. As part of its management plan, the company digitally mapped the trees, attaching a coin-sized numbered metal tag to each while labeling their species, location and condition. While Southern Botanical had experience in cemetery work, particularly with Dallas’ Restland Cemetery after a 2019 tornado, company arborist Steve Clary said he is impressed by what he found in the Waco cemetery.

“It’s incredible in the number of trees here and the species,” Clary said.

Nearly half of the cemetery’s 2,440 trees are live oaks, and sesquicentennial post oaks are among the oldest. The grounds also enclose pecan, sycamore, elm and other hardwood species, some of considerable size and age.

Though tall, leafy trees and quiet cemeteries might seem a logical match, that is the view from above. Below the surface, graves and coffins cut and confine trees’ root systems, causing problems that can affect their health, Clary said.

Despite their longevity, February 2021 was not kind. The Southern Botanical crews determined the prolonged deep freeze, after a heavy January snowfall, had killed or severely damaged 48 trees, and another 200 required pruning.

“The freeze exacerbated all the stress points those trees experience,” Clary said.

The job was both quantitatively and qualitatively challenging. Trunks and branches could not be cut and dropped due to fear of breaking surrounding headstones and monuments — a moment that came home to Clary while working on a pecan tree near the grave of Sul Ross, a former Texas governor and the seventh president of Texas A&M University.

“As an Aggie, I wanted to be very, very careful,” he said.

The amount of wood removed from the cemetery led Clary to look for places to dispose of logs and sawdust. He found one outside Chalk Bluff in Mesquite Valley Woodcrafts, which not only had space for sawdust, but a small sawmill, wood kiln and workshop plus an owner happy to handle native hardwood logs.

Caleb Scarbrough, grandson of a carpenter and a former Homestead Heritage apprentice, started his company in 2006, intending to work with native woods like mesquite, oak and walnut. Thinking of securing his own source for wood, he added a small mill, then a vacuum kiln to cut and season lumber.

“I started to produce my own timber as opposed to buying it all,” he said.

Thanks to tree service companies looking for an outlet, freelance timber harvesters and building contractors wanting distinctive touches for homes and restaurants, the timber side of Mesquite Valley Woodcrafts has grown to a major portion of the business over the years. Scarbrough and his team field offers of wood from as far as Mexia, while shipping wood and finished products to all 50 states, Iraq and Israel.

The first load of Oakwood timber arrived several weeks ago, including a sycamore log 8 feet long and 2 feet wide that comes from a tree Scarbrough estimates as more than 150 years old. Where visitors might see trunks and stumps stored around the open-walled mill shed and other outbuildings, Scarbrough sees furniture: four dining room tables in one elm log, a table top, then a bench, then a bar top in successive layers to be cut from a pecan log.

Mesquite Valley Woodcrafts cuts much of the mesquite, walnut and oak that it gets into flat slabs and planks, but quarter-saws woods like white oak and sycamore, splitting a log into quarters then planks from that, to highlight those woods’ grain.

In addition to the lines and color in a wood’s grain, there’s the difference between living sapwood and dead heartwood. The wood also shows the effect of other living organisms: holes bored by insects and spalting, a dark coloration caused by fungus.

It takes weeks and months to season the wood before it can be worked, and demand keeps the price high. An 8-foot mesquite slab, one of dozens awaiting shipment in a storage shed, brings about $800, and two are needed for a typical table top.

Mesquite Valley Woodcrafts turns out more than 40 kitchen tables and islands, bar tops and benches in a typical year. Some of its wood goes to the projects of woodworkers and students at nearby Homestead Heritage and some of Mesquite Valley’s Lazy Susans go to Homestead’s gift shops.

“I love creating things of value, producing something exactly what (a customer) wanted and it’s the centerpiece of their house,” he said.

In the months ahead, some of those pieces may continue a history that started more than a century ago as a seed in a Waco cemetery.

Thu Feb 3 , 2022
When Krissie Kiehne decided to move into her father’s house with her family, she looked past the swinging saloon doors, the wood paneling in the family room and the kitchen’s buckling linoleum. “It was in complete disrepair,” says Krissie. Her father hadn’t changed a thing to the sixties Prairie Village […]