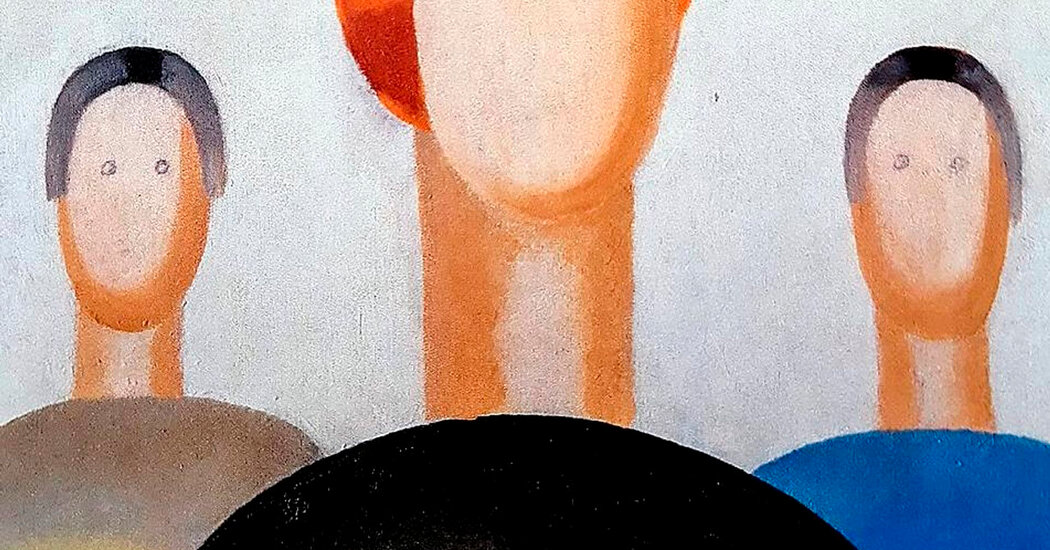 A security guard who recently vandalized a 1930s-era painting during his first shift at a museum in Russia has been suspended for what a top official at the museum called “a stupid mistake.”

In December, the guard at the Boris Yeltsin Presidential Center in Yekaterinburg, Russia, used a ballpoint pen to draw eyes on two of the faceless subjects of “Three Figures,” which the artist Anna Leporskaya painted from 1932 to 1934. The painting, which was on loan to the center from a museum in Moscow, was part of a temporary exhibition of avant-garde artwork.

The Yeltsin center, which is dedicated to Russia’s first elected president, did not announce the vandalism at the time. But after a report of the incident last month by The Art Newspaper Russia drew international attention, the center said in a statement that “there was an accident.”

In an interview with The New York Times on Tuesday, Alexander Drozdov, the executive director of the center, identified the guard as Alexander Vasilyev and said he had been suspended during a police investigation of the vandalism. The guard is employed by a private security company and had been working his first shift at the museum.

“He made a stupid mistake,” Mr. Drozdov said.

In an interview this month with E1, a Russian news outlet, Mr. Vasilyev said he had been a “fool” for damaging the painting, which he said he thought was a “children’s drawing.” He also said teenage visitors at the museum had asked him to draw on the painting.

“To be bluntly speaking, it was not a huge damage,” Mr. Drozdov said. “It was not dramatic. The guy used his ball pen.” The museum said it expected the pen marks could be removed without damaging the painting.

Mr. Drozdov said security cameras had recorded what he called a “smashing performance” by Mr. Vasilyev, who used a souvenir pen from the center to draw on the painting. He then told others that he didn’t feel well and left.

Visitors noticed the damage shortly afterward and reported it to the museum’s staff. The painting was subsequently assessed by a restoration expert and returned to its home at the Tretyakov Gallery in Moscow.

The museum has since installed protective screens over its paintings, and Mr. Drozdov said it was working with the security company to improve its hiring process.

“Three Figures” is the latest piece of artwork to suffer random damage. In 2018, one of Russia’s most famous paintings, “Ivan the Terrible and His Son Ivan on November 16, 1581,” by Ilya Repin, was badly damaged in a Moscow gallery after a man attacked it with a metal pole. And last year, a paint-splattered canvas worth more than $400,000 on display at a shopping mall in Seoul was vandalized by a couple who thought the work was a participatory mural.

Inside One Upper East Side Home With a Decidedly Modernist Edge

Tue Feb 22 , 2022
Neatly overlooking Central Park in a classic prewar renaissance-revival building is the elegant home to a young family of five. Triumphantly brought to life by interior designer Andre Mellone, the Upper East Side apartment is an ambitious tale of two units becoming one. It’s also a celebration of early 20th-century […]