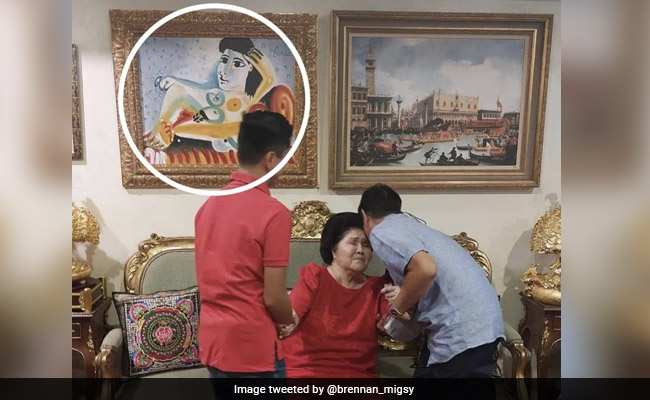 It is still unclear if the painting is genuine.

A missing Pablo Picasso painting was recently spotted at the home of the Philippines’ former first lady, Imelda Marcos, as she celebrated her son’s presidential victory. According to New York Post, the glimpse of Picasso’s Femme Couche VI (Reclining Woman VI), or a replica, was seen in a news segment by the local station TV Patrol after Ferdinand “Bongbong” Marcos Jr. became the country’s next president in a landslide victory.

Imelda Marcos, the widow of late Philippines dictator Ferdinand Marcos, was filmed hugging her son in the footage, in which the apparent long-lost masterpiece by Picasso is also seen hanging on a wall behind them. However, it is still unclear if the painting is genuine.

New York Post reported that a former official for the country’s Presidential Commission on Good Government (PCGG) – which was set up to investigate and recover the Marcos family’s ill-gotten wealth – said that the painting was one of roughly 160 pieces of art allegedly acquired illegally by the Marcos family during their more than 20-year reign.

Also Read | A Year After Its Disappearance, Famed ‘Guernica’ Tapestry Returns To UN

But, according to The Guardian, Ruben Carranza, a former commissioner of PCGG said that it is unclear if the painting was genuine because Mrs Marcos has had a habit of buying fake paintings, as well as lending fake paintings for display.

The Picasso was supposed to have been seized by the government in 2014. However, another former commissioner of PCGG, Andres Bautista, informed that the abstract painting – which depicts a woman lounging on a couch with a hand on her forehand – appeared in a 2019 documentary about the Marcos family, ‘The Kingmaker’, before it went missing as the task force hunted for it. Mr Bautista revealed that in the documentary the former first lady of the Philippines flaunted the painting, along with other rare antiquities and artworks in her collection.

Now, according to The Guardian, the unexpected appearance of the painting has added to fears that the family will use its now-increased power to brazenly further stifle efforts to recover the ill-gotten wealth. It is to mention that during Ferdinand Marcos’ rule, the dictator made stunning human-rights abuses, including the arrest, torture and killing of his opponent, and even using his power to seize as much as $10 billion in ill-gotten wealth.

Also Read | Picasso Being Cancelled In A Post-MeToo World?

Marcos Jr, on the other hand, has either downplayed or denied the abuse that occurred in the country under his father’s rule. Now, as the president, he would have the power to appoint the commissioners of the PCGG, granting him huge influence over the body that was set up to recover the family’s wealth.

Tue May 17 , 2022
Beverly Kerzner first met architect and designer Niels Schoenfelder over 20 years ago. At the time, he was 24 years old and had already built a stunning hotel in Pondicherry, India, that caught her eye. After tracking him down and initiating a fruitful conversation, she tapped him to build her […]