John Wesley, a painter of flat, cartoonish figures that seemed to spring not from the well of Pop Art but from some deeper, stranger reservoir of the American unconscious inhabited by floating babies, rubbery nudes and the hapless comic-strip husband Dagwood Bumstead, died on Thursday at his home in Manhattan. He was 93.

His death was confirmed by Fredericks & Freiser, the New York gallery that has represented his work for many years.

In a prolific career of more than five decades, Mr. Wesley, who was known as Jack, had the great distinction and occasional critical misfortune of eluding almost every attempt at categorization. He tolerated the label of Pop artist, he said, mostly because it got him into shows. Through the years, critics also described him variously as a “Surrealist secret agent,” a sly eroticist, a latter-day manifestation of Rococo, a renegade Color Field artist and a “Greek vase painter by way of Aubrey Beardsley.”

The sculptor Donald Judd enshrined Mr. Wesley’s paintings alongside masterpieces of Minimalism and other rigorously spare work at the Chinati Foundation in Marfa, Texas, though Mr. Judd seemed uncharacteristically at a loss to explain exactly why. Mr. Wesley was of no help in clearing up any of the confusion. He hated talking about his work and would go only so far as to concede a stray formal affinity with other artists, past or present.

“My painting, like the German Gothic style,” he once said wryly, “aims at thin construction and precise, clean shaping.”

He also made clear that he meant it to be funny, and his peers admired him for that.

“Elaborate good humor to downright damned foolishness in Western visible arts is scarce,” the artist Dan Flavin once wrote. “Jack Wesley can deal with them with weird eccentric precision.”

Mr. Wesley rarely gave interviews, but in one, with The New York Times in 2009, on the occasion of a retrospective organized by the Prada Foundation as part of the Venice Biennale, he said: “I didn’t go out and try to be a surrealist. It was just fun doing what I was doing.”

When his dealer held up a piece of the gridded, pencil-marked tracing paper that Mr. Wesley used throughout his career to translate newspaper and magazine imagery onto canvas with hallucinatory alterations, his eyes twinkled mischievously. “It’s magic!” he said.

John Mercer Wesley was born on Nov. 25, 1928, in Los Angeles. His father, Ner, named for an Old Testament patriarch, returned home one Saturday in 1934 from his job at a hardware store and died of a stroke on the family’s bathroom floor, where his son, then 5, found him “with his shoes still on,” as Mr. Wesley recalled.

He spent a year in an orphanage before his mother, Elsa Marie Patzwaldt, who worked for the Los Angeles Telephone Company, remarried and took him back. The trauma of his father’s death had a profound impact, and the young Mr. Wesley became a bookish loner, unable to drive until after he was married.

As a young adult, he attended art classes at night and took whatever blue-collar work came his way, including dishwasher, warehouse stocker and aircraft riveter. Two of his jobs supplied unlikely fodder for the painter he was to become. In 1953, he was hired by the illustration department at the Northrop Aircraft Corporation to simplify blueprints into drawings, a task that instilled a love of the simple, functional line and of matte, cyanotype blue, which he used in many early paintings.

After moving to New York in 1960, he took a job as a postal clerk — he described the United States Postal Service as “a very polite prison, full of very decent prisoners” — and began using some of the post office’s symbols, like one found on his employee badge and in a shieldlike postal stamp, as subjects for painting.

This work, he said, was intended to look like “banners, or posters, or something,” and was influenced by Jasper Johns, whose deadpan paintings of flags, targets and numbers were described by Mr. Johns as depictions of “things the mind already knows.”

Mr. Wesley’s reductive renderings of such everyday objects also chimed with work being done in those years by Roy Lichtenstein, James Rosenquist and Andy Warhol, whose “Campbell’s Soup Cans” paintings were first shown at the Ferus Gallery in Los Angeles in 1962.

But the visual fixations and style of Mr. Wesley’s work quickly turned out to be much weirder than those of his Pop compatriots. By 1963 he had brought in animals — camels, frogs, baby birds, libidinous squirrels — arranged in repetitive frieze-like formations that evoked ancient Egyptian tomb carving. “Repetition makes things funny,” he once said.

His titles — “Debbie Millstein Swallowed a Thumbtack,” “Hungarian Dog Wrestler,” “The Day It Rained Babies I Caught a Couple” — sounded as if he had borrowed them from old vaudeville routines. And he made curiously anachronistic portraiture choices, like Theodore Roosevelt, Rudyard Kipling and Count Henri de Baillet-Latour, the Belgian diplomat and president of the International Olympic Committee who oversaw the 1932 Summer Olympics in Los Angeles, an event whose press imagery beguiled Mr. Wesley for years.

“It’s really my house when I was little — those lamps, those curtains, that chair,” he said of the paintings’ scenarios, sometimes rendered with incongruous evocations of Japanese woodblock prints. He added: “My father was like Bumstead. He was thin like Bumstead, and he wore a tie to work, and when he came home from work in the evening he tipped his hat to the neighbors. I am seeking Ner Wesley.”

In his youth, Mr. Wesley somewhat resembled a comic-book character himself: tall and stooped with craggy good looks and a shock of straight brown hair. In New York, he was a member of a disparate crowd of nascent postmodern artists — none of whom made art like his — that included Mr. Flavin, Mr. Judd, Robert Ryman and the painter Jo Baer, Mr. Wesley’s second wife, with whom he had moved east from Los Angeles.

With his first wife, Alice Richter, he had two children, a daughter, Christine Knox, and a son, Ner Wesley, who survive him. After his divorce from Ms. Baer in 1970, he married the novelist Hannah Green, and remained with her until her death in 1996. The painter and playwright Patsy Broderick, mother of the actor Matthew Broderick, was his companion for six years, until her death in 2003.

Mr. Wesley’s work was shown in the international art exhibition Documenta 5 in Kassel, Germany, in 1972 and given a retrospective at the P.S. 1 Contemporary Art Center (now known as MoMA PS1) in Queens in 2000. His work also entered important public collections, including those of the Whitney Museum of American Art, the Museum of Modern Art and the Stedelijk Museum in Amsterdam. But in a sense he remained a cognoscente’s darling until the end — an elegant, inscrutable voluptuary.

“Wesley’s continuing vogue as a painter is, in its every aspect, more closely akin to that of a great jazz musician or songwriter than to that of an American artist,” the critic Dave Hickey wrote in Artforum in 2000. “In the enclave of enthusiasts, he is simply John Wesley, an acknowledged master, the Cole Porter of painting. Those who know know; those who care care; those who don’t know or care don’t have a clue, but that’s OK, too.”

Ms. Green, one of the best writers about her husband’s work, said that Mr. Wesley’s rare talent lay in calmly accepting the unknowability of his sources while still being able to touch them, like a waking dreamer.

“His ideas come as the mind turns (like a globe) into darkness,” she wrote. “His mysterious and varied iconography must have a certain magic, a certain mystery for himself as well.”

Tue Feb 15 , 2022
sofi stadium: centerpiece of california’s hollywood park   this sunday, super bowl LVI will be held in california‘s hollywood park in inglewood, in the so-called ‘SoFi stadium’ designed by HKS. the open-air stadium now stands as the first indoor-outdoor stadium ever constructed and is the largest stadium in the NFL, […] 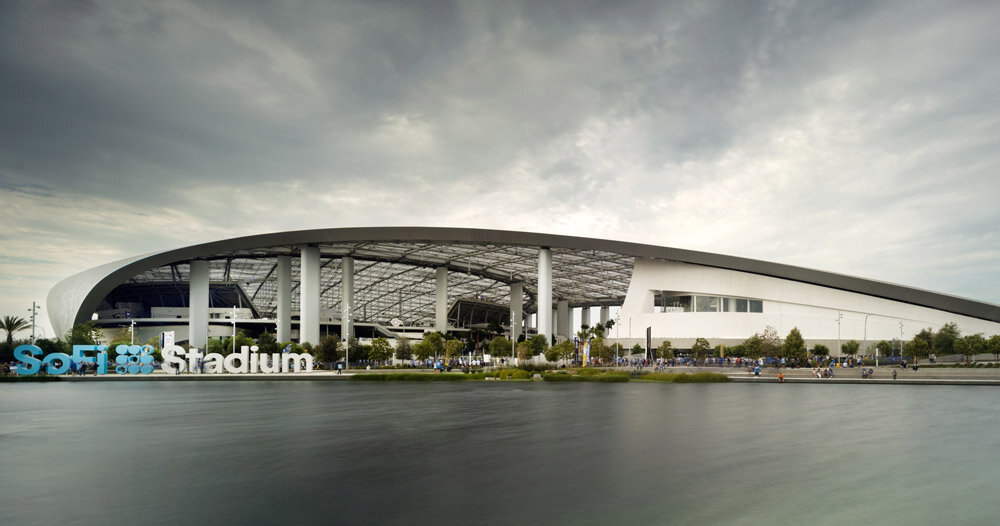