What could be the world’s most expensive house is about to go up for auction for more than half a billion dollars. But it’s not exactly for the house itself as it is for the rare paintings inside the home, including the only ceiling mural ever painted by the famous Michelangelo Merisi da Caravaggio.

Known as the Villa Aurora in Rome, it is the last existing building of a 16th-century country retreat built by Cardinal Francesco Maria del Monte and spans over 30,000 square feet, according to the listing handled by the Italian government.

If the villa sells for what it is asking for, it would be considered the “world’s most expensive” home ever sold.

The Caravaggio mural, painted in about 1597 or 1598, is an oil-on-plaster painting that spans a massive 10 feet long and 6 feet wide. The painting depicts the gods Jupiter, Neptune and Pluto. Jupiter rides an eagle, while Neptune is mounted on a seahorse. A naked Pluto and a celestial sphere completes the painting.

While most of the paintings, including the murals, have been preserved throughout the centuries, the rest of the villa remains in a somewhat abandoned state and in need of much renovations.

In 1968, peeling paint revealed a face on the ceiling that looked much like the artist. It had apparently been painted over during a past renovation of the home, according to the New York Times. When it was uncovered, they found not only the mural, but they also discovered Caravaggio had used himself as a model for the faces of the three gods.

The villa consists of nine other ceilings painted by prominent 16th-century artists, including one mural by Giovanni Francesco Barbieri, also known by Guercino. His fresco, titled “Aurora,” is what the villa is named after.

“To have a ceiling by Guercino and the only ceiling by Caravaggio makes it the most special residence of this kind in Italy,” Count Stefano Aluffi-Pentini, whose company, A Private View of Italy, organizes exclusive art tours in Rome, told the New York Times.

The artwork of the home is estimated to have had a “conservative” estimated value of €670 million in 2010. The art also includes statues dating to 500 B.C.

The property’s sale comes after an extensive inheritance dispute following the 2018 death of its owner Prince Nicolò Boncompagni Ludovisi.

Once a bid is accepted at auction, the state will have the opportunity to buy the estate at the same price because it is protected by the ministry of culture. But it is unclear if the government will be able to afford the home.

It is estimated that another $12.75 million is needed to restore the home to its original glory.

If the sale goes through, it would also beat out the $363 million asking price for a Los Angeles estate previously dubbed the highest ever on the market.

Wed Nov 3 , 2021
The Chinese government has removed domes and other Arab-style characteristics from mosques in Xining, a city in Qinghai Province, China, as part of its current “sinicization” campaign. What’s happening: The Dongguan Mosque, a 700-year-old mosque in Xining known for its green-and-white dome, has had its dome and two prominent minarets […] 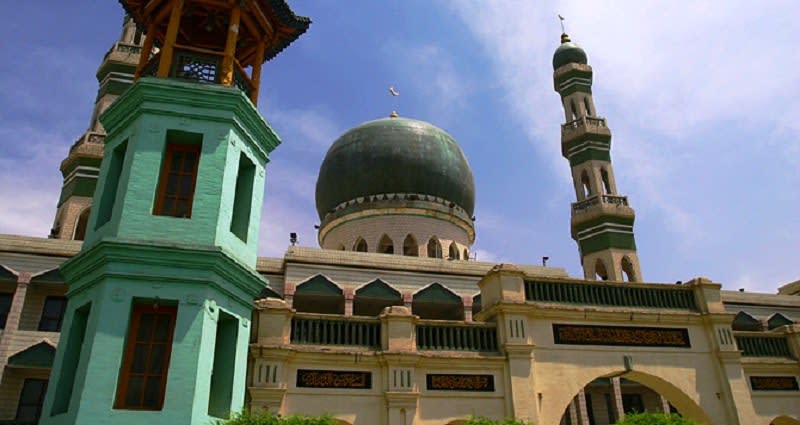