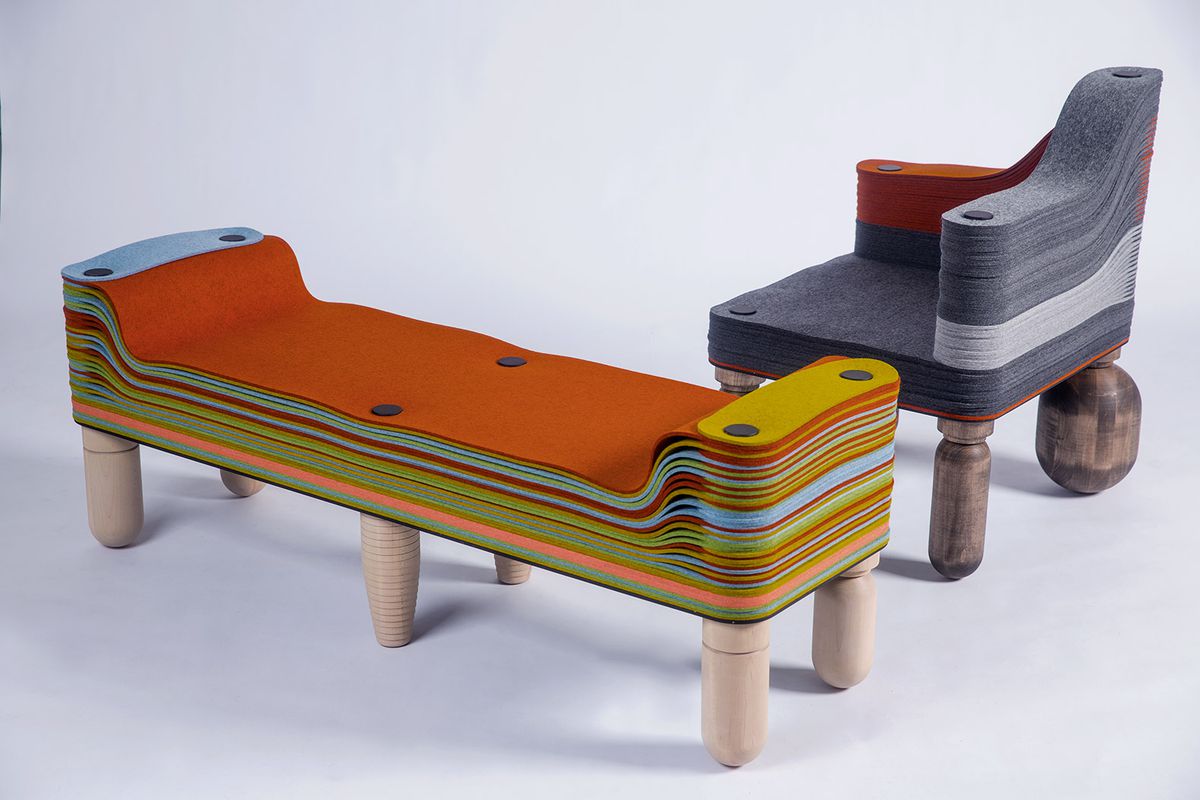 When Ashley Gorrie took a meeting with a major petroleum retailer a couple of years ago she never expected it would spark a new sustainability initiative for her eponymous industrial design firm. The client wanted to reinvent its waste management system, so as part of her research, Gorrie visited a facility in Southern Ontario that processes garbage and recycling. She was stunned: truck after truck dumped piles of contaminated waste – compost, paper, metal and plastic all mixed together, which then had to be re-sorted manually. Even after that, much of the material went to the landfill. “It was there that I realized, ‘Recycling is broken,’” Gorrie says.

Since then, Gorrie and her team in the North York district of Toronto have launched Unwasted, a virtual education platform and line of outdoor furniture made of repurposed post-consumer and post-industrial plastic­ – some of the same material Gorrie saw discarded at the dump. The high-density polyethylene is washed and ground into pellets for new uses, such as Unwasted’s chairs and tables inspired by mid-century modern design. “We realized we needed to make something that people were proud of,” she says. “What I wanted to see is valuable change.”

Gorrie is part of a growing number of designers attempting to put sustainability at the centre of their practice. As the climate crisis has intensified, so too has the urgency among makers to do their part in creating products that alleviate the strain of waste on the Earth. It’s a worthwhile endeavour given the oft-cited statistic from a global analysis published in Science Advances showing that, as of 2015, only nine per cent of all plastic ever made was recycled – the rest was incinerated or, most often, wound up in the landfill or natural environment.

“Absolutely designers have a role,” says Elizabeth Salonen of Mottoform design firm in Tecumseh, Ont., and an instructor at the College for Creative Studies in Detroit. “Everything that exists in our environment is design.” So every choice – from which materials are used and where they come from to the energy required to manufacture and then get goods to market­ – matters. According to Salonen, “Ninety per cent of environmental impact is determined at the design stage.”

With this in mind, there is a movement among designers toward a “circular economy” whereby nothing is considered waste because the fundamental value is to reuse, repair or repurpose resources. “For me, it’s been about working with the tools at our disposal,” says Jeffrey Forrest of Toronto’s Stacklab design studio, which sources material, manufacturing and infrastructure partners from Ontario, upstate Michigan and New York. “We’re trying to make regionally made goods competitive with overseas manufacturers … using waste,” Forrest says. “That is very cost competitive.”

Forrest manifested this thinking when he and his team stumbled upon a massive inventory database of scrap felt published online by an Ontario manufacturer of merino wool. At a glance, it was apparent to Forrest that they’d found a perpetual source of fabric that could be turned into furniture. The result is pieces made of felt remnants and sustainably harvested ash wood, as well as recycled aluminum and plastic, available through the brand Stackabl. Customers use a proprietary online “configurator” tool to create 2-D and 3-D models of furniture within a range of options. “Where most designers will sketch their form and then sub out manufacturers all over the world to make it, we do the exact opposite,” Forrest says. “We start with material and we figure out what can be done.”

It’s a clever flip that other designers are trying too, including Salonen, who salvaged granite and Corian slabs, some from a disposal bin, to create a collection of lamps and even a table under the name Offcuts, Reimagined in collaboration with Design Core Detroit. “I deliberately wanted to keep the material intact because it can take a lot of energy to reprocess,” says Salonen, who used cardboard tubes as furniture legs. She’s even given old textiles such as rugs new life by painting patterns onto them, and made wall sculptures molded from disposed plastic packaging.

Of course, there is no shortage of waste to be repurposed. But the viability of this movement depends on uptake among companies and consumers. The risk of “greenwashing” is a threat in both cases, as it takes advantage of buyers’ best intentions, and undermines those businesses “who are doing it properly,” Salonen says. “It’s an absolutely huge problem, so education is a huge component, and for brands that means transparency.” For customers, she advises investigating claims such as “compostable” and “biodegradable” and how products are made.

It also requires a shift in thinking about affordability. “Right now, North Americans have a very unsustainable mindset when it comes to their understanding of price,” Forrest says. “When you think of what a chair costs, [it] is based on probably overseas manufacturing.” The Stackabl furniture made and assembled in North America currently ranges from $3,780 for a small stool to $27,000 for a daybed. For now, it’s mostly collectors buying through Maison Gerard, a design gallery in New York, but Forrest plans to broaden the consumer base with pieces starting at $500.

Meanwhile, Gorrie uses packaging that is recycled and fabricated in a solar powered environment, and employs carpenters from an Ontario Amish community to mill the furniture, which sells for $250 for a side table to $590 for a chair. “The pricing of domestically sourced materials … and manufacturing has been a really challenging education curve to get customers on board to understand that they’re purchasing a high-quality product that’s going to last forever and here’s the story behind it,” Gorrie says.

All that said, these designers see increasing momentum. “I’m very bullish,” says Gorrie, who hopes to find more ways to incorporate recycled waste in her designs. “There is an inherent need.” Salonen points to the iconic Aeron chair by Herman Miller, which is now made using “ocean-bound plastic”; it’s part of the NextWave Consortium of multinational brands working on a supply chain of “non-virgin” plastic for their products.

So too are buyers investing in a cause alongside a chair. “We vote with our dollars now every time we buy anything,” Forrest says. “Everybody is starting to understand that.” For those motivated by this approach, it’s not just furniture: “It’s an expression of [their] desire to be a conscientious consumer and support the local economy and reduce waste,” Forrest says. “It’s simply that point manifested as a chair.”

Sign up for The Globe’s arts and lifestyle newsletters for more news, columns and advice in your inbox.