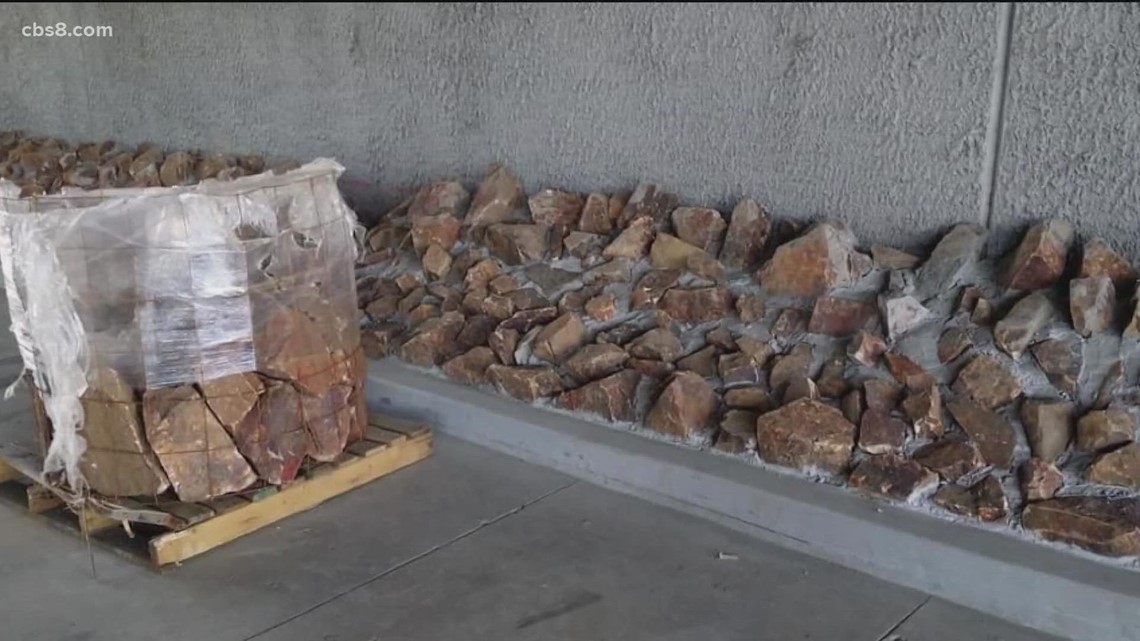 You may have seen benches with armrests or large rocks under bridges. It is what some San Diego homeless advocates call “hostile architecture.”

SAN DIEGO — From armrests in the middle of benches to large rocks added underneath bridges and along sidewalks, some homeless advocates in San Diego call these designs “hostile architecture” or anti-homeless.

In Hillcrest along University Avenue, it’s not hard to spot a metal bench at MTS bus stops with armrests that prevent people from sleeping on them.

“Prevents people from sleeping on them, so multiple people can sit down. Partitions also offer dedicated space to sit and help people with mobility issues stand up to get on the bus,” said Olson, via text message.

Two of the MTS benches are in front of the Mattarello restaurant in Hillcrest.

Kent Gillmore is a longtime Hillcrest resident, who has worked as the maître d’ at Mattarello since October.

“Some people take a place on the couch and pass out, and we have to deal with emergency responders that come and take them. We’ve even had to consider changing the seating that we offer in the lobby of the restaurant that I work at because of the same issue,” said Gillmore.

The City of San Diego put in large rocks at Imperial Avenue and I-5 as a homeless deterrent in 2016 to prevent people from sleeping under the freeway.

One year ago, San Diegan Bergen Toth started a petition calling for the “Removal of all hostile architecture in San Diego” where he planned to present it to the San Diego City Council if it got 200 signatures, but it only received 123.

Gillmore says housing isn’t a business’s responsibility and wishes more services were offered to those unsheltered.

“What are you going to do? You don’t want to turn your business into a shelter you know? The people do need something done for them,” said Gillmore.

In North Park, bright blue and white flashing lights connected with a motion sensor camera with audio are mounted on a CVS Pharmacy at Herman and 31st Avenues.

“They put up the camera as a deterrent to keep them from coming back,” said James Spellman, who works at North Park Self Storage across the street from the CVS.

Spellman says before CVS put in the bright light cameras, they had a big problem.

“A homeless person was right there camping with a tent, and then there was a stretch of people there with their collection of bicycles and other stuff that was almost the length of CVS,” said Spellman. “I have been homeless. I have lived on the streets, so I don’t mind the homeless being around. But this morning, some guy decided that our bushes were a good place to go to the bathroom,”

Spellman, he agrees with using hostile architecture as long as it is not harmful or could cause injury. His workplace just put in concrete blocks underneath their bushes as a deterrent.

“It’s not harmful, it won’t hurt you, but a camera or lights won’t stop the issue, we really need enforcement,” said Spellman.

In a statement, the City of San Diego says:

“This administration isn’t responsible for these benches or these rocks. Mayor Gloria is focused on strategies that end homelessness: Person-centered Street outreach, safe shelter, mental-health care, treatment for addiction and permanent housing.”

Fri Apr 29 , 2022
WEST LAFAYETTE, Ind. — A new neighborhood in West Lafayette will feature dozens of “low-maintenance living” luxury ranch homes with a starting price in the mid $300,000s. Essential Homes, an Epcon Communities builder, will host a grand opening of its model home in The Courtyards at Belle Terra, a new neighborhood-in-the-making. The Courtyards […]