Palmisano has been obsessed with upcycling since she was a young girl digging up old bottles in her central Vermont backyard. But the charm of an antique aesthetic isn’t the main reason she incorporates salvage into her home designs. “If you’re looking at my design manifesto, basically the number one thing is ‘anti-waste,’” she said. When she and her husband purchased a small lakefront cabin to rebuild from the subfloor up (using an 1800s laundry sink and a salvaged commercial refrigerator in the kitchen), they first paid a crew to dismantle the old structure piece by piece. “Every single piece, even the insulation, we had recycled, because we feel very strongly about playing our role and not having it all go into a dumpster.”

In another recent project, Palmisano said, “We took slate that was from old school chalkboards and cut them into kitchen counters.” The extra depth afforded room for potted herbs behind the sink and helped Palmisano achieve a uniquely modern farmhouse look at an affordable price.

That’s the triple threat of salvage, Palmisano said. Even though it typically demands more labor to repurpose old materials, it allows homeowners to add character, incorporate craftsmanship that they may not otherwise be able to afford, and help the environment by limiting waste and reducing demand for virgin materials.

“You’re getting something that no one else has, something that’s built to last,” Palmisano said. “People are so used to our disposable society right now, getting things cheap. But cheap usually means you have to replace it in three to five years. So I think spending a little bit more money to get something that you’re not going to have to replace is certainly worth it, not only for the look and feel of your home, but also for our environment.”

Palmisano is just one in a long line of resourceful New England upcyclers, however.

In Warren, R.I., most of the Freemasons who founded Washington Lodge No. 3 in 1799, including Jesse Baker, were sea captains and shipwrights. So naturally they viewed the four British frigates sitting on the ocean floor in nearby Newport as something of a lumberyard.

They purchased one of the ships from the state of Rhode Island, said lodge historian Steve Curria, and used a barge to float portions of the wrecked boat back to Baker’s shipyard. “They were able to dismantle a good portion of the ship, and they seemed to be very deliberate about the wood that they took,” Curria said. In particular, the Freemasons took some of the ship’s ribs — the thick, curved beams that formed the hull — and inverted them to create a vaulted frame above their meeting room. In a time before power saws, it’s hard to overstate the value of such huge pre-cut beams. “The rib cuts that they used to form the arched ceiling in the lodge are over a foot square, and they’re solid English oak,” Curria said.

The builders also reclaimed plenty of decking, which still graces the downstairs floor of the lodge. “It’s not just deck planks from some ship — it’s deck planking of a ship that was used in the Revolution, that the British felt the need to scuttle,” Curria said. “So you’re kind of walking around on history.”

In the town of Ipswich, history also lives on in floorboards, joists, and rafters, often out of sight. Ipswich boasts several dozen intact First Period (roughly 1626–1725) houses, purportedly more than anywhere else in the United States. But parts of some early Colonial homes have resurfaced in later dwellings. For example, the 18th-century Wainwright-Treadwell house features ornate load-bearing beams in its basement that were repurposed from a First Period house, said Ipswich town historian Gordon Harris.

And no wonder: Without the benefit of a proper port like those in Salem and Boston, Harris said, “During the period around the Revolutionary War up to about the Industrial Revolution, this town fell into poverty … They didn’t waste a nail, didn’t waste a board.”

“There was a strong tradition, clearly, of people reusing structural building parts,” said Ben Haavick, team leader for property care at Historic New England. “It seems like it was a fairly common practice: We have a number of houses in our collection that we know used pieces from older buildings.” At Cogswell’s Grant in Essex, Haavik noted, “Several of the major beams that you can see in the basement are clearly reused because they’ve got decorative elements on them that you would never put in your basement.”

By the late 19th century, however, incorporating salvaged materials was no longer just a matter of pure practicality. “It became very much a part of the design concept, especially during the Colonial revival,” Haavik said.

In Wiscasset, Maine, for example, the two-story piazza at Castle Tucker, added in 1859, features enormous decorative windows reclaimed from a church that was being demolished. And when interior designer Henry Sleeper started building his Beauport mansion in Gloucester in 1907, Haavik said, “One of the first things he did was create a room that was filled with architectural salvage from another house.” Sleeper also used doors and paneling he liked from a 17th-century house and floorboards taken from a home in Boston’s North End.

In the early 20th century, major museums and even ocean liners were installing period rooms, said Christie Jackson, senior curator at The Trustees of Reservations. So when Ellery and Mabel Cabot Sedgwick built their Long Hill estate in Beverly in the 1920s, their celebration of historical salvage was more or less en vogue.

“In this house, everything that you see that’s attached to the wall is essentially something that was salvaged,” Jackson said. The home’s façade includes bricks from a hosiery mill in Ipswich. Antique doors came from a home in Salem. In the entry hall, 18th-century Chinese wallpaper panels, procured from a London antiques dealer, once adorned a home in Stratford-upon-Avon.

And most stunningly, four entire rooms’ worth of finely carved woodwork — intricate molding and cornices, ornate door frames and mantels — came from the 1812 Isaac Ball mansion in Charleston, S.C. Much of that beautiful carpentry was created by enslaved cabinetmakers, Jackson said, whose first names she uncovered in her research. “It becomes more important for us to celebrate this work, knowing the enslaved cabinetmakers that had a hand in what we see, because this is the last surviving bit of that house,” she said.

By the time the Sedgwicks were building Long Hill, the Isaac Ball house had fallen into neglect. Susan Pringle Frost — “this very feisty, wonderful woman in Charleston,” Jackson said, often called the patron saint of preservation — told the couple that the home was at risk of being demolished. (She was right.) So the Sedgwicks paid $600 for the interiors, and Pringle’s fellow preservationist, a Black cabinetmaker named Thomas Mayhem Pinckney, removed and carefully numbered all the pieces, to be shipped by schooner and rail and reassembled in Beverly.

The beautiful interior woodwork at 350 Jamaicaway in Boston — the former home of James Michael Curley, the city’s charismatic but corrupt four-time mayor — didn’t have to travel quite so far. “There’s a tile fireplace, a three-story staircase, twenty-eight doors, and an entire hand-carved mahogany dining room that were all bought wholesale from this estate in Fairhaven,” said Declan Battles, marketing and communications coordinator at the Emerald Necklace Conservancy, which is now headquartered in Curley’s onetime house overlooking Jamaica Pond.

Standard Oil executive Henry H. Rogers built a magnificent 85-room summer home in Fairhaven in 1894, but a few years after Rogers’s death, his son, Harry, had the Gilded Age mansion demolished, auctioning off anything of value beforehand, piece by piece. Curley attended the auction and, in his autobiography, recounted the “bargain” he got. “I shall never forget buying the beautiful tile fireplace,” Curley recalled. “Before leaving Boston I had counted out a thousand dollars, mostly in one-dollar bills, and wrapped a five-dollar bill around them. I told the foreman I’d give him the huge roll, and he agreed immediately. It was a real bargain.”

There were other homebuilders at the auction, of course. So the Curley house shares DNA with other homes that incorporated salvaged items from the Rogers estate, such as the private residence at 3 Phoenix St. in Fairhaven, which includes the mansion’s other prominent staircase.

Salvaging materials fell out of fashion in the booming postwar decades, Palmisano said. But with construction debris generating nearly half of all landfill-bound waste in 2018, according to the Environmental Protection Agency, she’s happy to see the practice making a comeback. “It’s not just character pieces,” she said, recalling a wall tiled with porcelain recycled from toilets and old sinks. And it’s not just for rustic farmhouse styles, either. “Let’s say it’s a super modern design, but they want to use recycled material. We could go and buy some old oak flooring and have it painted in high-gloss black,” she said.

Palmisano said working with salvage can help us slow down, invest in quality craftsmanship, and stop chasing ever-changing trends. “Appreciate where it came from, who made it, and how much time it took them,” she said. “It’s a powerful way to change the way we look at design.”

Fri Oct 8 , 2021
A “Recycled Fun Palace” and pottery studios for autistic and non-verbal people are included in Dezeen’s latest school show by Leeds Beckett University.  Also included is a project that imagines a post-viral Blackpool and another that explores the idea that colonising another planet is the solution to climate change. School: Leeds Beckett University, […] 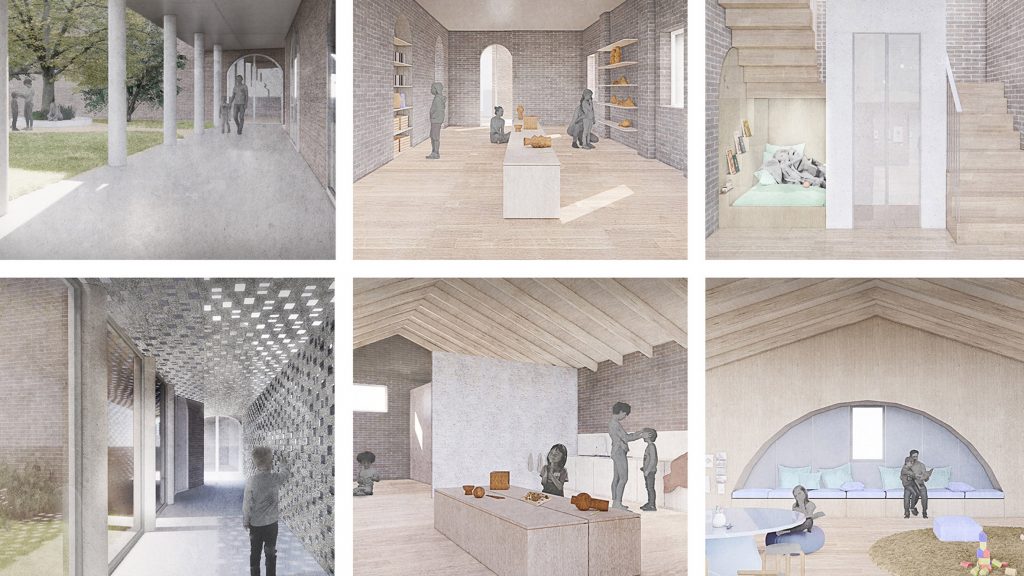