BRIER, Wash, January 13, 2022 – Dee Grayson, 77, and her
husband have lived in their “forever home” for
31 years – a gorgeous pink Victorian house named “Brier Rose.” The
Grayson family have always loved their home and community, but after suffering
some tragedies, risked losing it all if it weren’t for the efforts
of Habitat
for Humanity Snohomish County.

Grayson was struck by an uninsured driver three years ago
resulting in a traumatic brain injury affecting her speech and balance. Last
year, her husband woke up paralyzed due to an adverse reaction to a past
surgery. Life, to say the least, became a challenge for the Grayson household.

The VA hospital, where Dee’s husband was
receiving treatment, determined their home in Brier needed to be refitted for
ADA accessibility. The couple purchased a trailer for her husband to live in
and used their funds to make it ADA accessible for him, leaving no money to
complete a well needed paint job on their home’s exterior.

After some research, Dee’s daughter discovered the Home Repair Service program
offered by Habitat for Humanity of Snohomish County last October. An assessment
of the Dee’s home, Brier Rose, led Habitat for Humanity to complete several
smaller repairs, leading up to a full roof replacement that began January 10.

The initial request was to repaint Brier Rose, but upon
inspection Christian Anderson, Construction Manager for Habitat for Humanity,
noticed the roof was nearing the end of its life.

“The roof is the most important part of a home because it
keeps everything below it dry. So, home preservation really begins with having
a good roof,” Anderson told the Lynnwood Times.

According to Billy Ramirez, Senior Estimator and Project Manager
for Axis Roof and Gutter, the roof should have been replaced a long time ago
and probably wouldn’t even last another winter. To him, if
it weren’t for the combined efforts of Axis Roof and
Gutter, GAF,
and Habitat for Humanity, there could have been serious ramifications.

“There could have been a lot of secondary damage to the
house,” Ramirez told the Lynnwood Times. “The
whole house could have been damaged, simply because of leaks and such. We’re
just glad we caught it when we did and hopefully, we’ll finish up within
the next couple of days.”

Chris Anderson, who worked as a home inspector for many years
prior to joining Habitat for Humanity, informed the Lynnwood Times that cedar
shake roofs, the type of roof Brier Rose is outfitted with, typically have a
life span of 25 to 30 years. Since the house was built in the early 1980’s
it has never underwent a single roof repair.

“At a higher level [if left unattended] bigger leaks could
occur, resulting in a failure of structure with the roof. All of the materials
would absorb water and start decaying very rapidly, resulting in collapse,” Anderson
told the Lynnwood Times.

Habitat for Humanity gathered resources through GAF and Axis
Roofing, coordinated schedules, and began the roof reconstruction with the help
of many private and corporate donors who made the 10-to-15-thousand-dollar project
possible at no cost to the Grayson family.

“I must be really great to go around, especially around the
holidays, and give people such a gift,” Dee Grayson told the Lynnwood Times. “It
took 77 years for Santa to come to my house, but what a wonderful thing.”

By providing services like home repair to families who can’t afford them, Habitat for Humanity Executive Director Steven Li believes these efforts contribute to families having an affordable home.

“Because everyone is at home right now and that’s the shelter and safe place for people, and given the affordable housing crises, we believe keeping people inside their homes as well as getting people into homes is just as important,” Li told the Lynnwood Times.

The roofing project should be completed within 5 or 6 days in
which Habitat will continue to assist with some minor carpentry work involving
volunteer builders.

In addition to roof repair Habitat assists in several other
things, from ensuring homeowners have safe access to and inside their homes, to
exterior paint jobs although most paint efforts have been suspended until
warmer weather.

“If the roof is ok the next stage in preserving a home is the
paint,” Anderson told the Lynnwood Times. “Our dream is to help
more families but that will come as we gain more resources.”

To those who are interested in volunteering their services or
donating visit https://habitatsnohomish.org/

“Habitat is proud to be one part of a greater solution that
keeps families away from homelessness,” Anne Heavey, Public Relations Ace for
Habitat for Humanity, said.

For Spring Valley painter, expressing her love of nature one brushstroke at a time

Sat Jan 15 , 2022
Picture it: little Wendy Kwasny wearing a men’s button-up shirt backward, as an art smock, while taking art classes in the home of her childhood art teacher. That was the beginning for Kwasny, who would continue to mostly study watercolors with that first teacher, before high school art classes where […] 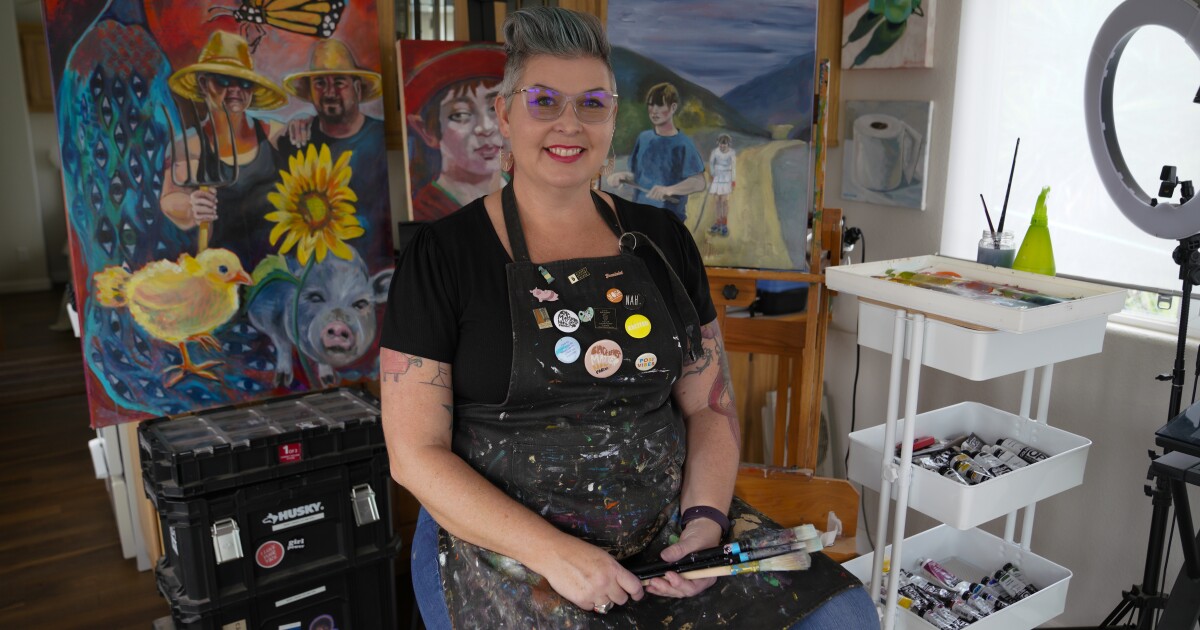