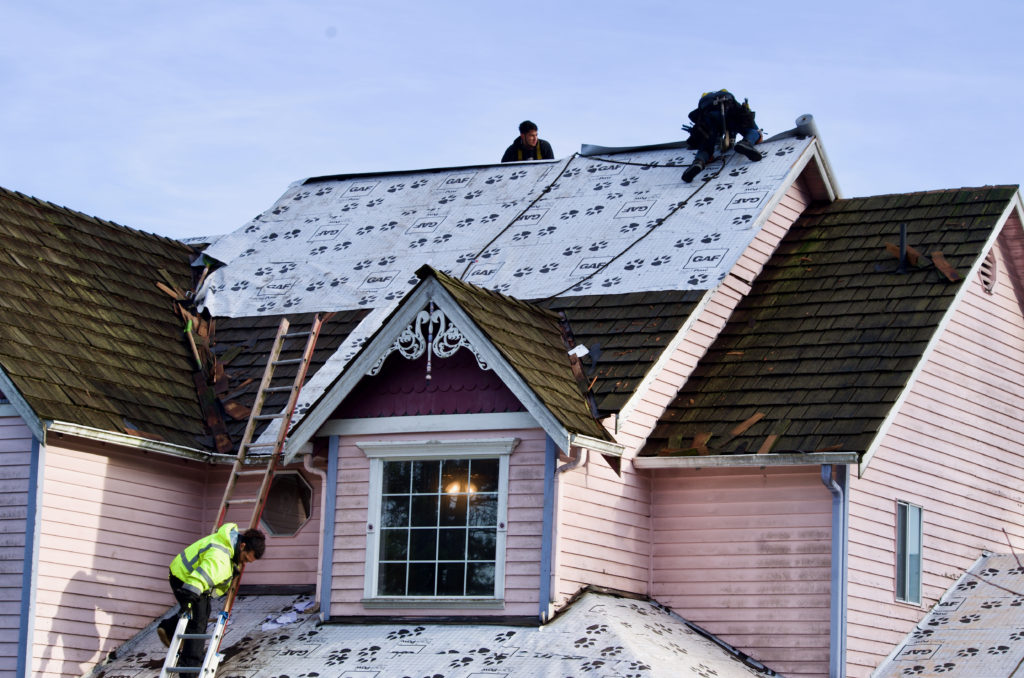 Brier resident Dee Grayson, 77, a retired educator, and her husband William, a veteran, have medical conditions that make taking care of needed repairs on their two-story house quite challenging. However, thanks to the efforts of Habitat for Humanity of Snohomish County and its community partners, the couple will now be able to remain in their home, which now has a new roof.

“We bought this house 31 years ago and my daughter wanted a pink house so we went for pink Victorian,” Grayson said. “We named her Brier Rose because I collected antique roses and filled it with antique roses. It was beautiful and we loved it.”

But a series of misfortunes over the past several years eventually left the couple unable to maintain significant portions of the home.

“Around five years ago my husband had surgery, had a steel rod put in his back, and then he began to decline and couldn’t do the work and it was up to me and my children,” Grayson said. However, three years ago Dee Grayson was hit by a driver and sustained a traumatic brain injury that, among other things, has also affected her balance. “I’m not stable,” Grayson said, “so I can’t do it myself and it got worse and worse.”

And then last year, William Grayson had a reaction to the implanted steel rod, which has left him paralyzed. While he was receiving treatments from the Veterans Health Administration, it was determined that the couple’s house needed extensive and expensive refitting to make it accessible to William. Lacking the money needed to cover those expenses, they instead purchased a trailer for him to live in on the property and used their remaining funds to make the home ADA accessible.

After that and medical bills, the family didn’t have the money required to keep up with several necessary repairs on their beloved home.

“The house over the course of these five years began to have problems and deteriorate,” Dee Grayson said. “Things started to rot and fall over and the gutter fell off. And my daughter said maybe there’s some community help or something to help a situation like this.”

“I know it’s been really hard for my parents, (with) both of them now disabled, to even feel comfortable living in a place that wasn’t repaired – it was unsafe,” said Grayson’s daughter Joy. “My mom said she couldn’t even go out on the deck, my dad couldn’t even go on the steps, of course,” plus there was an additional risk of the gutters falling down.

While doing some research, Joy found the Home Repair Service program offered by Habitat for Humanity of Snohomish County.  Following an assessment of the home last fall, several smaller carpentry repairs were completed through the program before the entire roof was replaced.

Dee Grayson recalled the words of Habitat for Humanity of Snohomish County construction manager Chris Anderson, who “said that what needed to happen was a roof – that it wasn’t going to make it much longer. We had put on a roof, but three decades ago, and I didn’t know it wasn’t stable.”

Anderson explained that Dee Grayson’s original request “ was to paint their home and there was some areas where we do need to do that, but my assessment was the roof was in far worse condition.” A former home inspector, Anderson said he considers the roof to be the priority. “If you can keep your roof tight and in good condition then the rest of the house is going to survive because the water infiltration is the thing that destroys homes quicker than anything,” he said.

“We do repairs,” Anderson explained, adding that “a lot of the fun of my job” is engaging volunteer builders to help with tasks such as carpentry, painting the exterior of homes and building ramps, steps, and decks. “This roofing, though, is way too dangerous and so we only engage professionals to do the roof just for the safety concerns,” he said.

With the help of GAF, a roofing manufacturer, and Arlington-based contractor Axis Roof and Gutter Inc., the Grayson’s roof now has all new plywood and vapor barrier materials underneath architectural-grade asphalt shingles that are guaranteed for 50 years.

“I’m delighted that we were able to sort of assemble the partnership to make this happen,” Anderson said. “It’s terrific.”

Many of Habitat for Humanity’s affiliates across the country also engage in home repair services. To qualify for the program, Snohomish County homeowners must live in the house that needs repairs and also make 60% or less of the area’s median household income when adjusted for the number of people living in the residence.

Executive Director Steven Li said that the criteria for the program are both income level and need. The project applications approved are “based on the greatest need, and then both financially and also condition of the home,” he added. “Most of the applicants that are approved are those that fall in the low to very low-income levels that just essentially are on the verge of like not being able to kind of get through without some sort of major contribution to the home.”

Since the local program’s inception, it has been able to complete a variety of projects, such as helping homeowners to make accessibility improvements, building ramps, replacing outdoor siding and even completing one other roofing project.

“We’ve done about 18 (projects) since we started it and we’re slated to complete about 32 for the fiscal year,” Li noted. “Since we have limited resources, we really try to focus on the ones that are the most critical, the ones that will be sort of the most impactful as far as helping people stay within their homes.”

Shortly after the pandemic hit, “one of the big reasons for really starting the program up was we saw the need of people needing to stay in their homes,” Li added. “People were at home and they needed to be at home. And a lot of people, as housing started getting more expensive and as just the cost of living in this area started getting more expensive people were at risk of losing their homes.”

Li said the home repair program represents a kind of pivot for the local organization and a way to also prioritize helping those in need to maintain their homes as opposed to just building new housing.

“We’re sort of in a housing affordability crisis in the area and as homes continue to get more and more expensive building affordable housing just becomes so much more challenging,” he said. “And I think one of the big things for us really in focusing more of our energies towards the repair service is just really needing to make sure people are staying in their homes as much as we are getting people into their homes.”

Assistance with home repairs is determined on a case-by-case basis that typically requires the organization to seek donations for building materials, volunteer labor and the financial contributions needed to cobble that project together. Li noted that the organization’s program acts as a broker of sorts in order to line up and coordinate everything that is required to tackle and complete each job.

“The fact is, we wouldn’t be able to do this (the Grayson roof replacement) without our partners with Axis Roofing and GAF, which is the materials supplier,” Li said. “They’ve generously donated materials and labor and then we combine that with funding from corporate and individual donors that are willing to give and want to be sort of part of the solution.”

Joy said the home repair program and volunteers “have been amazing – they were so obliging and so kind it was truly an amazing thing.”

Work on the Grayson’s roof was originally scheduled to start the Monday after Christmas, but snowstorms and weather conditions ended up pushing it back until last week. Crews then worked over the course of the weekend to get it completed.

Grayson said when Anderson first told her that they were going to put a new roof on, “it was really quite a miracle.” She added, “We were depleted because of the tragedy from my husband and my own accident, of course — and then all of the sudden here he was just so kind.”

Noting that it was shortly before Christmas when she received the good news, Grayson said, “I collect Santas, from the time I was little, so he’d (Santa) be at my house.” She added that Anderson was dressed for snow at the time and he also has a full hearty laugh, “And I thought: Here’s this guy and he’s coming at Christmas time, he’s dressed in red and green, he’s giving me gifts and not only that, he landed on my roof like Santa and his name is Chris. That’s Kris Kringle right there – I’ll always think of him as that.”

Of the repairs made to the family’s home, daughter Joy said: “It means the world and absolutely has meant that I don’t have to watch my parents feel like, ‘Wow I can’t even fix the roof over my head,’ because of the disabilities and problems” that they have encountered over the past couple of years.

“It’s such a comfort to know that my parents will just be happy in their old age and be able to retire just peacefully and not have to have that extra added stress,” she added.

Grayson said she hadn’t ever considered that she’d need such help and was unsure what the family would have done without the repair program’s timely assistance.

You can learn more information about the Habitat for Humanity of Snohomish County’s home repair service program here.

Tue Jan 25 , 2022
2022 is officially here, and while we may still be dating documents with 2021 for the next few weeks (or months) a new class of modern design trends has arrived to remind us that time is in fact moving forwards and we’re not stuck in a 2020 loop, even if […] 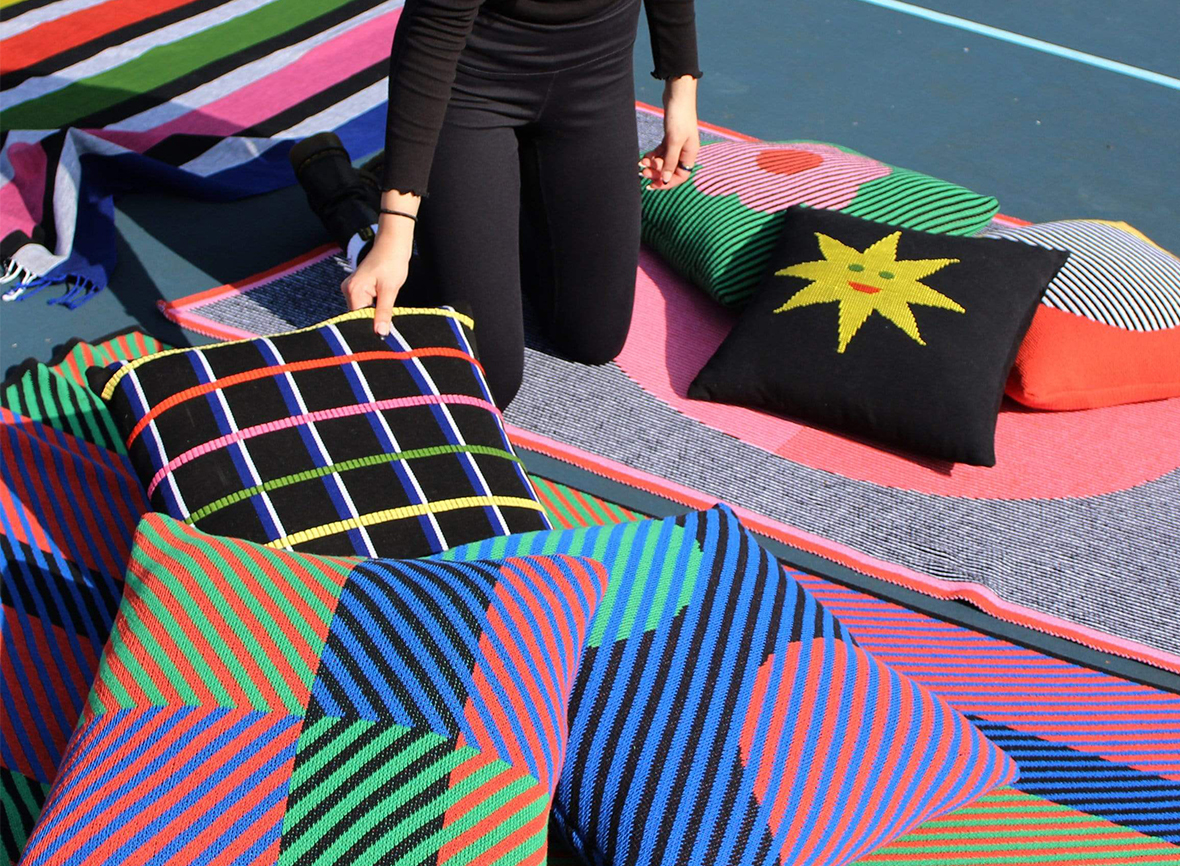