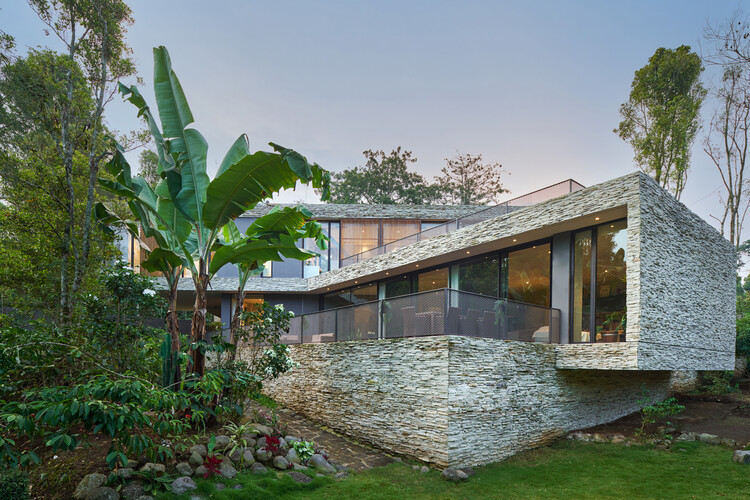 Project Summary – For a house built on a plantation for a family of four on the slope of Mt. Kawi in East Java, Indonesia, Ivan Priatman Architecture stacked two rectangular blocks neatly to minimize the cutting down of existing trees. The second-floor volume is rotated to cantilever past the first-floor volume creating engaging spaces that are formed by the juxtaposition. The house, all clad with local sandstone, blends the massiveness and weight of the textured stone blocks, with the weightlessness that is implied by the hovering volume.

Project Description – Located in a village on the slope of Mt Kawi in East Java Indonesia, GA House is a two-story house built inside an existing coffee and clove plantation, for a family of four that owns the plantation. Out of the 6092 m2 site, the house is built on the higher part of the land, close to the road leading to the top of the mountain, in an area where there are less mature trees. An inner perimeter wall that encompasses an area of roughly 1900 m2 provides the house privacy during harvest where workers would come to the plantation. From the street, the house is concealed by two slabs of horizontal stone walls.

The placement of the masses minimizes the cutting down of existing clove trees. A rectilinear first-floor volume is placed parallel to the street and faces west to the back garden, while the second story is rotated and cantilevered past the first-floor volume, to face a more favorable southwest direction. The second floor cantilever on the front end greets visitors entering the compound and creates an entry for the house, while on the other end the hovering mass borders and gives shade to the outdoor deck while providing a viewpoint from the second floor to the plantation beyond the inner perimeter wall. A 3.5-meter long teak wood partition pivots for an entrance to the house and blurs the distinction between the wall and the door, as well as dissolves the barrier between indoor and outdoor. The stairway connecting the two floors creates a triangular extrusion punctured by small triangular openings that let in the morning light to the interior space.

The rectangular configuration of the concrete columns coupled with the steel bracings on the cantilevers provides the house with much-needed structural stability and stiffness, considering its location in an earthquake-prone area. The house is mostly closed off at the front, but fully open to the landscape and plantation at the back. The north end of the first floor is occupied by the service and guest area, whereas the south end is occupied by the main living area. The sliding glass doors on the living area fully opens to the outdoor deck extending the indoors to the landscape and beyond, while the lush vegetation and trees provide necessary shade from afternoon sun exposure. The bedrooms are placed on the second floor facing southwest and have commanding views of the landscape. The house is clad with palimanan stone, a local sandstone, in a textured ledge-stone pattern, put in place by local craftsmen.

Mon Oct 4 , 2021
Kris Engskov has left his position as president of Aegis Living and is set to lead a new company in the home health care space. Prior to joining Aegis in 2019, Engskov worked as executive vice president of business integration for Starbucks (Nasdaq: SBUX) and was assistant press secretary and […]