A collective of congregations called on Richmond and Chesterfield County officials Tuesday to allocate funding for a nonprofit program focused on repairing and replacing mobile homes in the area.

At the behest of Richmonders Involved to Strengthen Our Communities, a multifaith community advocacy group, Councilwoman Stephanie Lynch pledged to vote in favor of giving the Richmond-based nonprofit Project: HOMES $300,000 to pilot a new mobile home initiative.

“Together we can fix this,” Lynch said. “It’s going to take a lot to fix hundreds of years of systemic oppression, but we can do it.”

The organization said it is advocating for officials to support the program as part of an effort to increase the availability of affordable housing in fair or better condition.

Chesterfield Supervisor Jim Holland declined to support the county giving the nonprofit $150,000 for the program, even though the county’s budget does include funding for the nonprofit, according to RISC organizers.

“At this point, we are poised to approve the budget given what we know at this point,” he said. “I’m not going to make that commitment right now, because I usually don’t make them in advance before the final review of our budget.”

Councilwoman Reva Trammell did not appear at the event as planned because of a family emergency, but RISC organizers said she agreed to push for adding $300,000 in the city’s next annual budget for the program.

RISC is made up of 22 congregations around the region. Since 2002, the group has backed initiatives to improve childhood literacy for students in Richmond Public Schools and reduce gun violence, among others.

The group is an affiliate of the Direct Action and Research Training Center, a national network of congregation-based organizations that identify local issues, research solutions and lobby government leaders in a public manner to push for action.

RISC estimated that 2,000 of its members from various congregations in the Richmond area attended the group’s annual Nehemiah Action Assembly in person or virtually.

Throughout the evening, the crowd of approximately 1,200 in the Greater Richmond Convention Center cried “justice demands risk.” The group also highlighted the plight of four Spanish-speaking area residents who described the struggle of living in ramshackle trailers.

The group also renewed its calls for the city to adopt the gun violence prevention program Group Violence Intervention.

While Mayor Levar Stoney and other officials recently announced that the city will invest $1.5 million in after-school programs, a gun-buyback program and other initiatives to address the rise in fatal shootings in recent years, Stoney has resisted demands that he implement that program.

Stoney did not appear at Tuesday’s assembly. The organization said he has not met with their leadership since his re-election in November 2020.

After a demonstration RISC held at City Hall in February, Stoney in a statement accused the group of “bullying and intimidating public officials” and using “gun-violence victims as pawns.” A spokesman for the mayor also criticized the GVI program at the time, calling it “a law enforcement-heavy approach.”

RISC members pushed back against the mayor and his administration’s assertions in Tuesday’s assembly.

The group called on members to call Stoney’s office to demand action, and requested that he partner with the National Network for Safe Communities, the organization behind the Group Violence Intervention program, to perform an analysis of the city’s gun-violence problem.

She said authorities suspect that the perpetrators mistook her husband for someone else.

“Mayor Stoney, I am no pawn. This is my story,” Shaw said. “This is the pain my children and I will live with for the rest of our lives. I’ll forever have a hole in my heart because of your unwillingness to act.”

This Eclectic Cleveland Heights Condo Fits Plenty of Character Inside

Sun Apr 17 , 2022
Designed by Reflections Interior Design, this vintage-inspired condo bursts with style and character, while leaving no corner unused. It’s not every day that designer Katie Tumino gets to work with a homeowner who has an […] 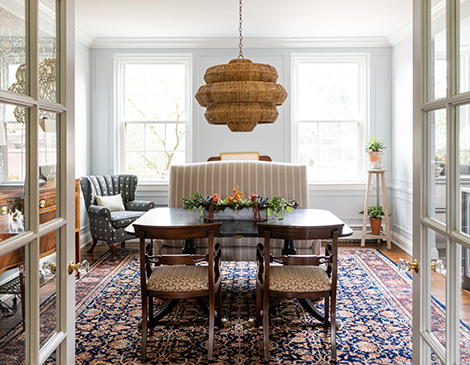