Weeks before Hunter Biden’s art show — “The Journey Home” — opened at a New York gallery, marking the splashy debut of a newcomer with a famous name to the commercial art world, the White House insisted it had safeguards to ensure that no one who buys a painting will be able to use the acquisition to influence his father’s administration.

The White House Counsel’s Office helped develop guidelines for the Manhattan gallery to keep the identity of art buyers from both the artist and the administration. The gallery could reject offers that were “out of the ordinary.”

Ultimately, the White House said, the person who would enforce this arrangement would be the gallerist who is hosting Mr. Biden’s show, Georges Bergès.

In an interview this week at his gallery on West Broadway in SoHo, Mr. Bergès, 45, fully embraced his role as gatekeeper.

He is having no discussions with the White House, he said. He sets the prices, most of which are in the tens of thousands of dollars. He vets the buyers and only he, he said, will know who has bought one of the 25 works hanging in the gallery’s two floors.

But Mr. Bergès declined to address what sort of criteria he or the White House had set to distinguish between lovers of art and lovers of influence.

Would there be contract provisions for purchasers designed to minimize any ethical concerns? Would foreign nationals, for example, be excluded from purchasing?

He deflected the questions, asserting that as a private dealer he must keep those details confidential. Overall, he said, he expected those interested to be “serious collectors,” most of whom were his existing long-term clients that he could trust.

But he acknowledged that the art market is a free market. If someone wanted to reveal publicly that they had bought a Biden work, he said, what could he do to stop them?

The lack of specifics from Mr. Bergès and the White House about the safeguards has done little to silence those who say the art exhibition is a potential ethical minefield. They say they worry that the prices Mr. Biden is said to be charging — high for an art-market novice — have more to do with Mr. Biden’s name and contacts than his skill.

“It’s a plan that is almost certain to fail,” said Walter Shaub, senior ethics fellow at the Project on Government Oversight and former head of the Office of Government Ethics. “When you look at public perceptions of corruption, it has already failed.”

Mr. Shaub scoffed at the suggestion by Mr. Bergès that in Mr. Biden he had found the next great artist of the 21st century.

Biden administration officials tend to respond defensively to questions about Hunter Biden, often privately making the point that his art venture is not the same as what they depict as brazen attempts by President Trump’s sons to associate the family business with the presidency.

Mr. Bergès, too, views the criticism as largely politically inspired, unduly negative and overwrought. He said he doubted any buyers would make public their purchase because collectors typically value privacy. By announcing they owned a Biden, they would only expose themselves to criticism in today’s polarized climate, he said.

(Mr. Bergès said he has been the subject of threats, and his gallery has been vandalized. A visitor to his gallery noted an armed security guard working there.)

“If you are a head of a company, you have Republicans and Democrats as clients, does it serve you well?” he said. “Let’s say you fall in love with a painting, a Hunter Biden, to have your name publicly told to everybody. If you look at the amount of calls I get, imagine a business owner — they would be punished for buying art.”

(Though Mr. Biden will not be told who purchased his art, according to Mr. Bergès, he will be told what it sold for.)

If buyers did publicize their purchases, a person familiar with the White House plan said, government officials would be wary of requests from them for business or access.

Mr. Bergès declined to be specific about the price tags for a Biden, though he acknowledged that one might exceed $100,000. He said none would reach $500,000, as was once reported.

Mr. Biden’s art carries value because he is, by Mr. Bergès’s accounting, someone whose art will be remembered for a long, long time. He refers to a Biden painting as a “totem of reflection,” and with no hint of irony, he said: “Hunter will go down as a great artist for this century. If anything, his father will be known as the father of a great artist.”

Mr. Bergès said part of what resonates with him about Hunter Biden is how, in a country suffering from an opioid crisis, Mr. Biden has overcome addiction to pursue a career as an artist. (Mr. Biden has spoken of grappling with drug problems.)

“Hunter Biden’s story is the American story. It’s a redemptive story,” he said.

Mr. Biden, who has no formal training as an artist, has been painting for decades, but whether he has previously sold many, or any, of his works is unclear. Mr. Bergès said he did not know, and he was hesitant discussing whether, currently, he had sold any of the 25 paintings that hang on the walls of his New York gallery — works on canvas, metal and Japanese Yupo paper.

But he did say that 40 to 50 people had toured the exhibition on an appointment-only basis, and that the majority of the paintings were “earmarked,” meaning potential buyers had put a claim on a work but had not necessarily bought it yet.

Last month, Mr. Biden had a one-night reception to showcase his art in Los Angeles, but Mr. Bergès said that the 20 works displayed were not for sale.

At the event, Mr. Biden mixed with people who were, at the least, admirers of his art, angering observers who said he was clearly getting some sense of the universe of people who are potentially interested in acquiring it.

Mr. Bergès said he would never tell Mr. Biden who had bought his art and, further, that to his mind, it is standard industry protocol that dealers do not tell artists who has bought their work.

But experts say that the hobnobbing at Art Basel Miami Beach, or at gallery receptions across the country, would indicate that, for many dealers of contemporary art, putting buyers and artists together in a room is part of the marketing playbook. The interest of collectors is fueled by meeting the artists whose work they cherish, while artists seek out opportunities to cultivate their patrons and to confirm their work has a good home.

“For a lot of artists, it’s a point of pride to know their work is in the collection of a collector of some repute,” said Joan Kee, an art history professor at the University of Michigan.

“There are certain collectors who love to score over their rivals, ‘I got a Richter and you didn’t,’” said Ms. Kee. “Oh, the bragging rights!”

Mr. Bergès said he plans to open the show, which ends Nov. 15, to the public soon. He would not say whether there will be a closing party, or whether the artist will attend if there is one. (Mr. Biden has so far only taken a virtual tour of his own show, Mr. Bergès said.) There will then be a new Biden exhibition at the Bergès gallery in Berlin in the early spring.

Jessica Tillipman, the assistant dean for government procurement law at George Washington University Law School, said she was sympathetic to the idea of Mr. Biden being able to forge his own career, out of his father’s shadow. But, she said, the current arrangement that shrouds buyers in secrecy is only a fig leaf to staunch criticism and just increases speculation.

“It is not a true safeguard,” she said. “They say it is, but saying it is doesn’t mean it is.”

She said a better policy would be transparency. “Open the door, let everyone see,” she said. “Sunlight is the best disinfectant, or you have just got to shut it down.”

Mr. Bergès does not agree. Making public the details about prices or buyers, which is not typically done when galleries sell art, would only distract from the art and encourage more criticism, he said.

He insisted the safeguards will work. “What you get when you buy a Hunter Biden is an amazing piece of artwork,” he said.

“If you are looking for anything else,” he said, “you have come to the wrong place.”

an ephemeral tower emerges from the architectural vestiges of the past

Sat Nov 6 , 2021
adaptive reuse is the answer to the post-covid era’s requirements   this proposal is an example of adaptive reuse design, transforming landmarked office skyscrapers — like the AT&T building in NY city by philip johnson, known also as 550 madison — into residential spaces that priorities tenants and the […] 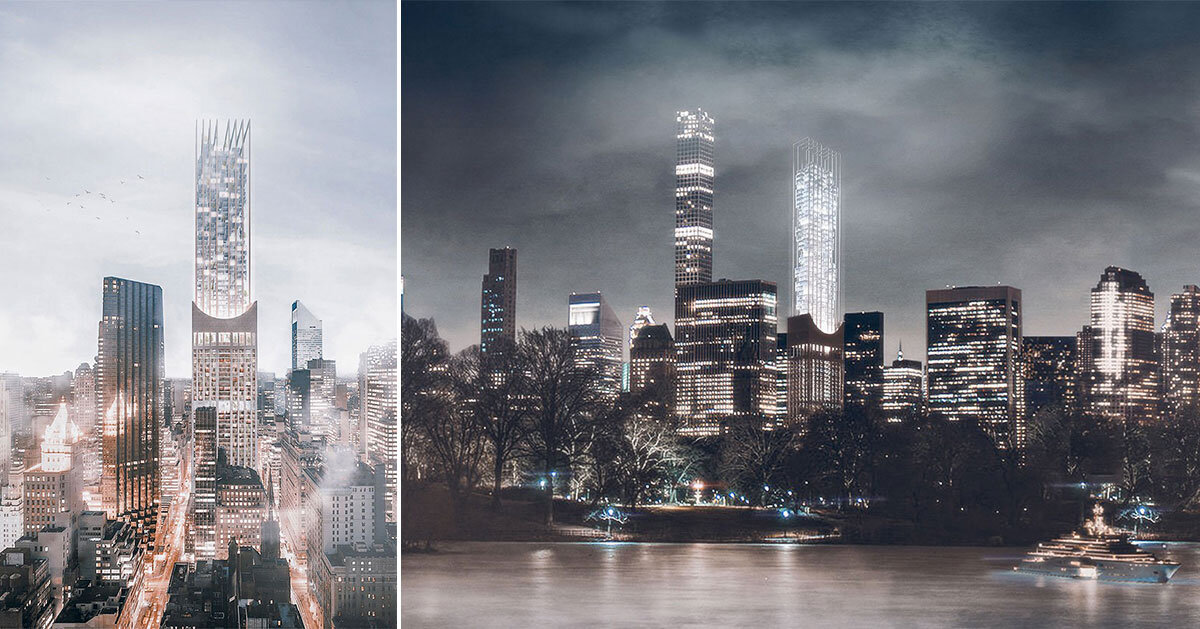