Last week I took my daughter to the Museum of the City of New York to see the Stettheimer Dollhouse and the breadbox-sized art show installed within. The dollhouse and its art show both have been at the museum since 1945, but only in the last year have they been given a room of their own. And while my daughter was a little distracted by a sighting of Oscar the Grouch, down the hall in “Puppets of New York,” I was completely entranced.

Commissioned in 1916 by Carrie Stettheimer — a wealthy New Yorker who ran fashionable salons with her mother, Rosetta, and her sisters Ettie, an author, and Florine, the well-known painter — the house is a 28-inch-tall, two-story, 12-room mansion, complete with bathrooms and an elevator, modeled on André Brook, the Tarrytown estate where the family summered. Carrie spent 19 years decorating its interior with Empire wallpaper, Louis XV furniture and other exquisite furnishings, at one point even renting herself a separate apartment in which to work on the project.

She also convinced notable artists of the time, like the sculptors Alexander Archipenko and Gaston Lachaise, to contribute appropriately sized art. Most famously, Marcel Duchamp reprised his “Nude Descending a Staircase,” the Cubist-influenced portrait of a body in motion that scandalized New York at the 1913 Armory Show. His 1918 rendition, an ink-and-wash version somewhat more jagged and explosive than the original, is just over three and a half inches tall.

After her mother died in 1935, Carrie stopped working on the house, and when she herself passed nine years later, the pieces she’d collected were unhung. Before donating everything to the museum, her sister Ettie chose 13 of the postage-stamp-sized drawings and paintings to hang as an exhibition in the house’s grand ballroom, as she believed her sister would have wanted, and three sculptures to position nearby. (A few more hang elsewhere in the house.)

The first rooms you’ll meet are the living quarters, exposed to view by removal of the facade. They look as if their residents have only just stepped out. There’s bacon on the stove and a cake on the icebox; last night’s mahjong tiles, handmade by Carrie, still litter the library table. At first it may be a thrill to peer into all the rooms with a God’s eye view, or it may feel comforting and cozy to imagine yourself inside. But as you start to count up the details — the dumbbells and clothes wringer in the master bathroom, the cunning little cabinets in the linen room, the Dreiser and Van Vechten titles on the library’s red lacquer bookshelf — you’ll quickly discover they’re more than you can take in. Around the back, meanwhile, the art exhibition is only partly visible through three French windows.

The new installation addresses these difficulties by surrounding the house with photos of enlarged interior views, along with related historical materials. It’s a judicious presentation, one that makes the inviting but secretive house more accessible without stripping away its mystery, though I’d have preferred longer wall labels to QR codes. A receipt for Ettie’s 1945 donation indicates that along with the house, she sent a doll, complete with a Saratoga trunk and trousseau; and Carrie shows up, in a reproduction of a portrait by Florine, as a glamorous flapper at a garden party.

The art exhibition begins on the house’s patio, where Ettie installed Gaston Lachaise’s stately alabaster “Venus” and a bronze “Mother and Child” by William Zorach. Zorach’s sensitively rendered mother gazes toward her counterpart with an expression of concern, while the goddess, regally flicking a cape behind her nude body, deigns to look at no one. If you were small enough to enter this miniature Stettheimer salon, you’d have to pass between eros and domesticity to do so.

But looking in, at least, you’ll find a portrait of two dancers by the Swedish painter Carl Sprinchorn hanging above the fireplace. She, in a billowing pink skirt, does a jeté, while he, in a navy leotard, waits beside her; around them hover blocks of primary color so bright that the couple is almost obscured. Eleven more framed drawings and paintings cluster around the Sprinchorn: a mix of voluptuous graphite nudes by Lachaise; sinuous female bathers, posed against blood-red skies, by Marguerite Zorach; a sailboat confronting a great wave; a Cubist pastoral scene; Duchamp’s “Nude”; and, in Louis Bouché’s “Mama’s Boy,” a child peering between heavy green curtains.

In retrospect, it’s curious to note that Ettie Stettheimer, one of three brilliant free spirited women putting the finishing touches on another’s great artistic project, chose to hang such a large proportion of female nudes with work by only one female painter. But it’s also a brilliant trick, a time capsule within a time capsule that captures both the constraints and possibilities of life as a bohemian woman in prewar New York.

Sprinchorn’s broad, squarish canvas dominates the arrangement and the shapes of the other pieces — smaller, narrower — and their less florid colors emphasize that fact. It’s like the dancers are the leading characters and all the other pictures their dreams. And what exactly is in their dreams? They’re both preoccupied with female beauty, whether as a symbol or as a concrete reality. But among the pictures on the right side, next to the ballerina, there’s also the doughty sailing ship, a Lachaise nude posing exuberantly and Duchamp’s portrait of a woman as pure electric energy, all appropriate enough for a person gracefully leaping onstage.

On the left, beside the male dancer, there’s only a sullen little boy watching from his bedroom — and another Lachaise drawing of a figure turning away. The male dancer is really just standing there. The ballerina is where the action is.

Wed Jan 26 , 2022
When President Joe Biden brings up gun control in relation to the hostage crisis in the Texas synagogue, he isn’t wrong. This is part of the equation. When a clearly disturbed individual seemingly can purchase a gun off the street, no questions asked, we’ve got problems. We do need commonsense […] 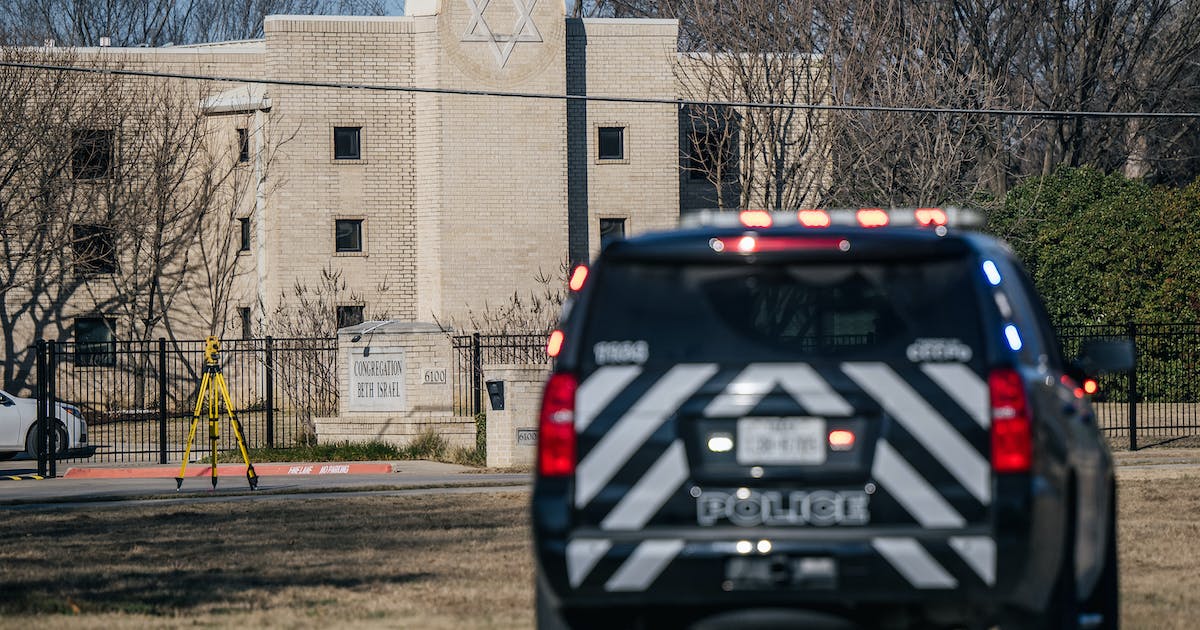