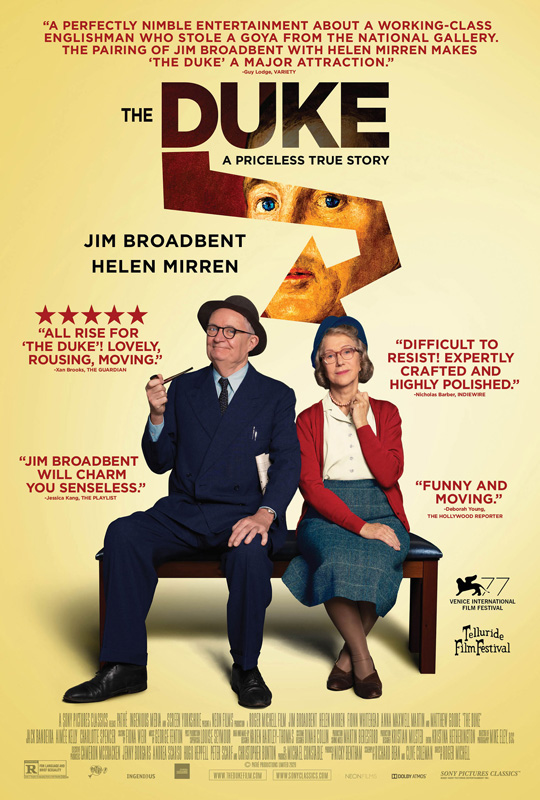 Coming to the M.V. Film Center on Friday, May 13, is “The Duke,” a comedy with two veteran actors, Jim Broadbent and Helen Mirren. It was the last film of late romantic comedy director Roger Michell. Although fictional, “The Duke” is based on a true story about the 1961 theft of a Goya painting from London’s National Gallery. Unlike the1990 unsolved Isabella Stewart Gardner Museum theft in Boston, it’s the first and only heist from that British institution, and of course, was returned.

Celebrated actor Broadbent plays Kempton Bunton, a bit of a crackpot socialist, and equally celebrated Dame Mirren plays his cranky wife Dorothy, who supports the family with house-cleaning and babysitting jobs. The film begins in the Old Bailey courtroom of his trial, where he repeatedly insists he’s not guilty of the theft.

Then the film moves back six months. When the viewer first sees 61-year-old Bunton at the family home in Newcastle-upon-Tyne, he is protesting the TV licenses that support the BBC, insisting he’s removed the TV component that accounts for BBC programming. Not only has he eliminated BBC channels, but he insists the licenses are unfair, particularly for the elderly and poor. Plus, free licenses could relieve loneliness.

He lands in jail for 13 days for watching TV without a license. When he’s released, his son Jackie (Fionn Whitehead) picks him up on his motorcycle, and on the way home they stop at the grave of his 18-year-old daughter Marian, who was killed in a bicycle accident. His still-grieving wife Dorothy never mentions her daughter, and refuses to visit the gravesite. Then Bunton takes his complaint to London, unfurling a banner announcing his protest in support of commoners and the elderly.

Meanwhile, he loses one job after another. He’s fired as a taxi driver for letting off WWI disabled veterans without paying. He loses his job in a bakery for protesting treatment of an immigrant. In a subplot, Bunton writes stories that never get published.

Outraged that the gallery spent £140,000 for a portrait of the Duke of Wellington by Goya, Bunton decides to steal the portrait from the National Gallery. He sneaks into the gallery at night and absconds with the painting, which he hides at home in a wardrobe with help from his son Jackie. The theft causes a national uproar, added to when the portrait also appears in the Bond movie “Dr. No.” The authorities assume the painting had to be stolen by a master criminal. Bunton fires off letters to the gallery’s administrators claiming he’ll return it when the government provides support to the elderly.

Once Pamela, the girlfriend of Bunton’s older son Kenny (Jack Bandeira), a Leeds construction worker and low-level thief, discovers the painting in a wardrobe and threatens blackmail, Bunton decides it’s time to return it.

He’s arrested once again, and jailed. This time his trial proceeds like a “Saturday Night Live” skit, the thief entertaining not only the audience in the gallery but jurors and barristers alike.

The charm of “The Duke” comes in watching these two renowned actors perform. The film will also resonate for American viewers familiar with the Gardner Museum theft. The fact that the film is based on a real-life heist makes it doubly enjoyable, and not to be missed.

Sat May 7 , 2022
When Washington, D.C.–based interior designer Lorna Gross was asked to overhaul a historic 1870 row house in the upscale Georgetown neighborhood, she expected the usual challenges that come with marrying a 19th-century structure with modern sensibilities. What she didn’t expect was a client who arrived with some unconventional ideas of […]