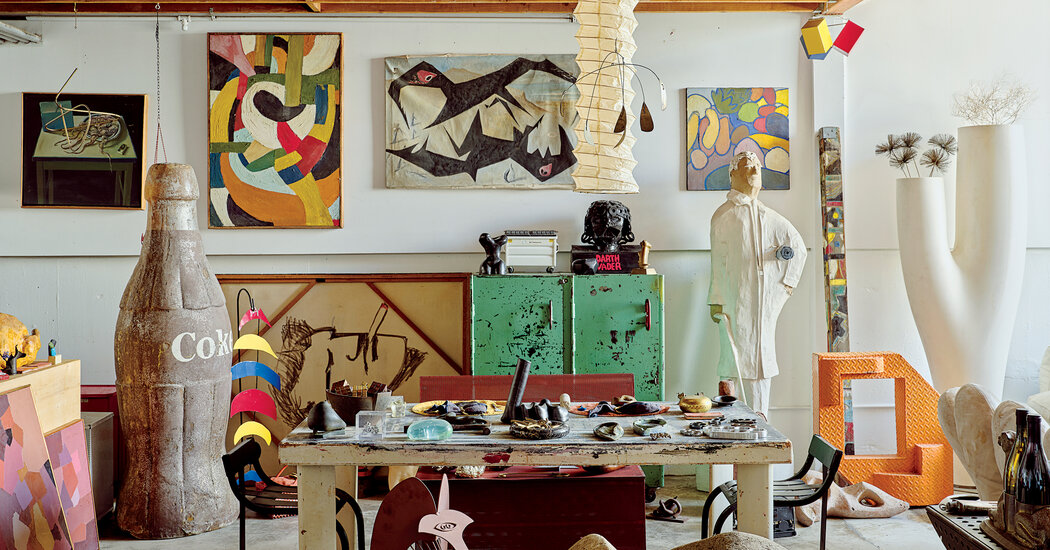 IT HAD TAKEN several months of scouring flea markets before Jonathan Pessin finally found the weathered, hollow fiberglass Coke bottle that now stands sentry between the dining and kitchen areas of his loft in Los Angeles’s industrial Frogtown neighborhood. Reportedly produced by the Coca-Cola Company circa the 1970s or 1980s, the six-foot-tall sculpture was one that Pessin, a collector and dealer of strange objects and furniture, says he had been “thinking about seriously” for quite some time, a kind of white whale in his yearslong pursuit of tracking down various quotidian items rendered in Claes Oldenburg-like proportions. He’d recently lost out on a plastic rotary phone fit for a giant (“It still haunts me,” he says), though who knows where it might have gone in a 1,500-square-foot space already overstuffed with a to-scale sculpture of the Modernist architect Ludwig Mies van der Rohe; a massive leather chair modeled on the glove of the legendary Yankees center fielder Joe DiMaggio; a human eye-shaped bowling ball that lolls on Pessin’s couch in place of a throw pillow; and a papier-mâché Ticonderoga pencil, nearly as long and yellow as a school bus, that lines the balcony railing of the bedroom upstairs. There, lying across the duvet, is a pair of jeans so large, it makes the mattress seem as if it’s taken off its own pants.

“I want the best, weirdest version of something, and I want to live my life like I’m in a sculpture garden,” says Pessin, 51. He glances down from the sleeping alcove into a raw open-plan apartment with 22-foot-high, wood-beamed ceilings that’s filled wall to wall with his many aesthetic fixations: Before his oversize phase — which he’s now renouncing, having noticed ironically large objects becoming trendy in design circles and online — there was the tangential-but-different papier-mâché one. Prior to that, he collected art with donkey iconography, including a beat-up painting in his stairway punctured with two bullet holes that “supposedly hung in a Mexican bar, where they used to get drunk and shoot at it,” he says. Over the years, he’s accumulated several heavily patinated brass Rubik’s Cubes, an assortment of coin-operated kiddie rides and myriad hand-shaped sculptures in plaster or wood. Lately, he’s into perforated metal pieces and bringing outdoor furniture inside, whether the towering cactus-shaped planters that flank his 1970s B&B Italia white leather sofa, or the trio of textured fiberglass boulders that serve as his coffee table — for now, at least, until he once again rearranges the hundreds of wares within his home. (His friend the Los Angeles-based designer Pamela Shamshiri sometimes helps.) “I buy ridiculous things, but I like to think my taste is evolving,” he says. “In a way, this loft is like the inside of my brain.”

Pessin never intended to have this much stuff. Nearly a decade ago, he began building his object library — best viewed, perhaps, as a collection of many subcollections, worthy of its own cataloging system, not that he’ll ever be that organized — after falling for the thrill of the chase, that sense of unexpected discovery, at flea markets like the Rose Bowl in Pasadena. He now shows up before sunrise, flashlight in hand, ready to race through its hundreds of stalls as the doors open at 5 a.m., hoping to snatch up treasure before the other pirates. This quest led him to estate sales, junk shops, art auctions and prop houses, where he’s always searching for an acquisition that might “somehow fill the hole in my heart,” he jokes, “though it rarely does.” And yet living with clutter may have always been his destiny: As a child in Brookline, Mass., he collected rocks, went antiquing with his mother, rarely missed “The Price Is Right” — even today, he prides himself on knowing how much something should cost, a skill that proves useful when haggling — and slept in a converted closet under the stairs, which he says prepared him for the series of flexible, atypical Los Angeles dwellings that he’s inhabited since he moved to the city in his 20s to work in the film industry. “I gravitate toward heavy things and metal things, and I’m sure that has to do with some sort of permanence,” he says. “Glass makes me nervous. Ceramics make me nervous.”

NOT LONG AFTER Pessin became a staple on the collecting circuit, he had amassed enough inventory to become a dealer himself. At the time, he was mostly focused on the kinds of small objects and quirky knickknacks that now crowd his own tables and bookcases, as well as anonymous art, unsigned works that might — though probably not — have been made by a master, or just someone talented enough to create something visually interesting or at least replicate something well known. In Pessin’s home office, tucked into a nook under his staircase, there’s a verdigris Jean Prouvé-esque desk beneath a wall-hugging facsimile of a geometric Frank Stella painting. He also owns works reminiscent of those by Ruth Asawa, Piet Mondrian, Alexander Calder, Richard Diebenkorn and many others; when he once tried to get a wooden sculpture authenticated by an auction house via representatives of the Colombian sculptor Fernando Botero, the artist himself wrote back in all caps that the piece wasn’t his, only further arousing Pessin’s suspicions.

As his name and collection grew, top interior designers such as Kelly Wearstler and Sally Breer also took notice; he soon began selling them art and furniture for their projects. “His perspective is so refreshing and irreverent,” says Breer. “He’s not precious, and he’s got a sense of humor, but there’s also a refined elegance to how he appreciates quality.” Pessin’s hobby had, in effect, become a full-time enterprise. He named it NFS, after the industry term “not for sale,” referencing his own habit of inquiring about items that other dealers weren’t willing to let go. At first, he sold directly from his own loft, which he moved into in 2014; he’s since taken over both an adjacent showroom and overflow storage space from artists who’ve given up their studios within the complex, a maze of low, gray stucco warehouses that were built around the 1940s. The only problem, Pessin says, is he “sometimes experiences pangs of pain” when a customer tries to purchase a piece he’s not ready to relinquish. And there are certain items that are, indeed, NFS, notably his series of works by the late 20th-century artist and designer Robert Loughlin. Employed by both Andy Warhol and Jean-Michel Basquiat as a picker at New York’s flea markets and vintage stores, Loughlin repeatedly painted the same strong-jawed, cigarette-smoking beefcake visage on mugs, tables, chairs and other surfaces. As the lore goes, his eye was so discerning, he once found a genuine Salvador Dalí painting for $40 that later sold at Sotheby’s for $78,000, which perhaps explains Pessin’s fascination.

“I connect with things more than I connect with people,” Pessin says, pointing out several of his Loughlins. “But I don’t want to have to have so many things.” Still, he can’t seem to help himself — he shops seven days a week — and, really, what’s the harm in that? All this stuff will continue to glut our planet whether he buys it or not. And in an era that fetishizes minimalism, upcycling and constant self-optimization, the collector’s life is a reminder that there is, in fact, no moral imperative to the accrual or disavowal of objects. There are merely those who enjoy things — and those who don’t.