The U.S. real estate market is at a crossroads. Over the last 12 months, house prices have increased by 19.8%, according to the Case-Shiller National Home Price Index. However, interest rates are currently on the rise, which can impact the amount of money prospective homebuyers can afford to borrow. That could drag prices down from here.

Investors have been dumping certain high-flying real estate stocks in preparation for this new economic environment, and Offerpad Solutions (OPAD -5.80%) has been one of the hardest hit.

Offerpad stock is currently down about 60% from its all-time high, but the company just delivered a blockbuster Q1 2022 earnings report, which suggests there’s still some life in the real estate market — or at least in Offerpad’s innovative business model. 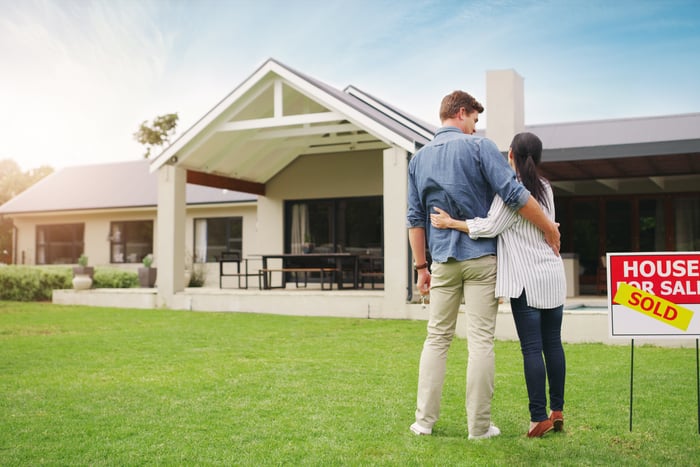 Offerpad’s primary business is simple at face value: It purchases homes directly from willing sellers, renovates them, and attempts to flip them for a profit in a process known as iBuying. Rapidly rising house prices over the last few years made this strategy especially popular, as it appeared relatively easy to make money.

But Offerpad’s largest competitor, Zillow Group, found out the hard way that iBuying is no sure thing. The company was incredibly aggressive with its house purchases and wound up taking a heavy loss in 2021, forcing its exit from the segment entirely. At its peak, that company operated in 35 markets across the country.

Offerpad’s approach is slightly different. The company moves quickly to renovate each property, aiming to sell within 100 days of the purchase date. This minimizes the potential impact of a broad decline in real estate prices, for example, because it means inventory doesn’t sit on its balance sheet for long periods of time.

In addition, Offerpad is highly selective, operating in just 21 markets across America. But its recent success has prompted a planned expansion into eight new areas during 2022. While growth is always positive, the company will need to navigate these new markets with caution as interest rates trigger a potential softening in house prices.

Predictions that the Federal Reserve would act aggressively to fight high inflation have been broadcast since at least the beginning of the year, yet it still appears house prices remained buoyant enough to propel Offerpad to its greatest quarter ever.

The company was profitable, with $41 million in net income in the quarter, improving from a break-even result in Q1 2021, a testament to Offerpad’s thoughtful strategy. It came on the back of the highest revenue result in company history, furthering a powerful streak of growth. 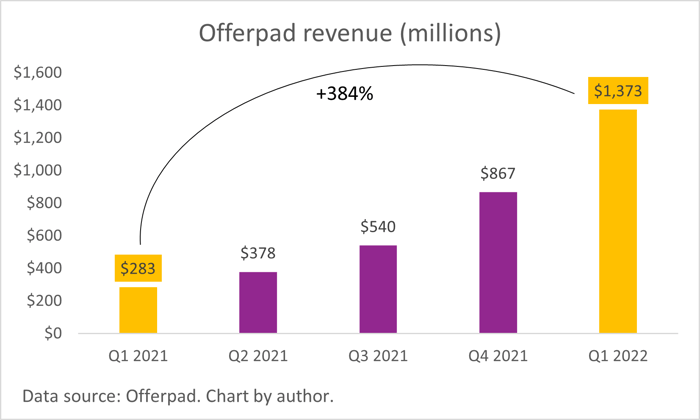 Offerpad sold 3,602 homes in Q1 2022 and acquired just 2,856. That shrank the company’s inventory by 746 properties, which might lead to lower revenue figures in upcoming quarters, but it could prove to be a prudent decision if house prices do begin to tumble.

A real estate company of the future

While iBuying is Offerpad’s bread and butter, it’s expanding its suite of services to reach a larger addressable market. The company offers its FLEX home selling service for consumers who want to try their luck on the open market. Offerpad connects them with a local agent, provides cleaning and renovation services, and even makes a cash offer for the home as a backup option.

It’s also moving into the lending space through its Offerpad Home Loans segment, now available in nine U.S. states. In the long run, these moves will help to diversify Offerpad’s business and potentially reduce some of the risks during tough economic periods.

For now, analysts expect the company to deliver its best-ever year in 2022. The forecast is for $5.2 billion in revenue, representing a 152% jump over 2021. In addition, the company could deliver its second consecutive annual profit, this time of $0.25 in earnings per share. In short, Offerpad continues to buck the loss-making trend set by its competitors.

It presents some risks given the interest rate environment this year, but with Offerpad stock about 60% from its all-time high, it might look attractive to some investors as a long-term bet at the current price.

OMA's office furniture for UniFor is colourful and modular

Tue May 24 , 2022
OMA’s office furniture for UniFor is colourful and modular A new collaboration between OMA and UniFor on the Axel Springer Berlin Campus has evolved into a fully fledged office furniture collection, to be unveiled during Milan Design Week 2022 In 2014, German publishing behemoth Axel Springer selected OMA to design […]